The universe needs new particles: Many phenomena cannot be satisfactorily explained on the basis of the elementary particles known today. One such new particle is the axion. The CAST experiment at CERN has been searching for axions from the Sun since 2003. Now it is being retired. Although CAST has not discovered any axions, the most recent measurement phase has yielded promising results. As reported by Nature Physics, CAST has significantly improved its measuring accuracy, thus paving the way for the next generation of more sensitive experiments. 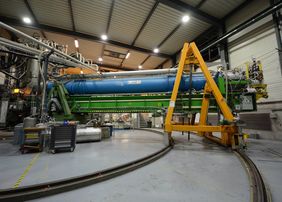 After 14 years, solar axion research in the CAST experiment has reached the end of the road. Scientists are currently discussing follow-up experiments with the same research goal, most notably the International Axion Observatory (IAXO).

Even if CAST has not detected any axions from the Sun, it has yielded findings that will benefit the next detector generation. “The final measuring phase of CAST proved to be particularly fruitful,” says Georg Raffelt, astroparticle physicist at the Max Planck Institute for Physics (MPP). “In comparison to the first measuring phase, the CAST experiment was able to triple its sensitivity.”

In concrete terms, this means that scientists are able to delineate more precisely the energy range in which to search for axions. The final measuring phase between 2013 and 2015 used ultra-low-noise detectors and a new X-ray telescope – technologies that set the standard for follow-up experiments.

Difficult, but not impossible to detect

Axions are hard to detect, not least of all because their mass is unknown. “Current theories put the axion in an energy range between 40 and 400 microelectronvolts, making it around ten billion times lighter than the electron,” Raffelt explains. According to theoretical models, axions should appear throughout the universe; the Sun is just one potential very strong source of the particles.

So how can axions be detected? “On the basis of a special property of the particles,” Raffelt explains. “In a strong magnetic field, axions are transformed into electromagnetic waves, i.e., light, and vice versa.” The light particles can be captured and visualised with the help of suitable detectors. Solar axons would have an energy in the X-ray range consistent with the high temperature in the interior of the Sun.

Axions from the galaxy: candidates for dark matter

Axion research is currently experiencing a tremendous boost. Beside solar axions, scientists are also searching for axions originating in the depths of our galaxy. Because of their origin, those axions are candidates for dark matter.

Scientists at the MPI for Physics have also launched an axion research initiative. Together with other research facilities, they are working on an axion trap called MADMAX. Like CAST, MADMAX uses a strong magnetic field to transform axions into light particles (photons).

“Galactic axons have lower energy than their solar cousins,” Raffelt says. “The energy of the converted photons would therefore also be lower – somewhere in the microwave range.”

Acting as an “axion radio”, MADMAX will therefore scour the frequency range from 10 to 100 gigahertz. Moreover, this project is just one of several that are about to be launched. All of them share the goal of finding these elusive particles some day. The CAST magnet, which has been tested on solar axions, will also be fitted with new instruments so that it too will be able to search for galactic axions in future.