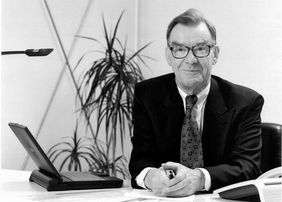 Professor Dr. Reimar Lüst, was a great researcher, a visionary and a pioneering leader in science policy, his death has come as a great loss. Reimar Lüst died on 31 March 2020 aged 97. As a Scientific Member, Reimar Lüst played a key role from 1960 onwards in designing and shaping research at the Max Planck Institute for Physics and Astrophysics, as it was then called.

His research focused on the solar system and space travel. One of his experiments, with which he made a name for himself even early on, was designed to measure solar wind with the aid of artificial comets. This branch of research soon led to the founding of the Max Planck Institute for Extraterrestrial Physics, with Reimar Lüst as its founding Director.

We say farewell to Reimar Lüst in deep gratitude for his life work, and will honor his memory.