The Council of the Deutsche Physikalische Gesellschaft (German Physical Society, DPG) has unanimously elected particle physicist Rolf-Dieter Heuer to be the next President of the DPG for the period of office starting in 2016. The DPG is the largest physical society in the world with over 62,000 members. On 1 April 2016 Heuer will take over from Edward G. Krubasik, who routinely will become Vice President as planned. 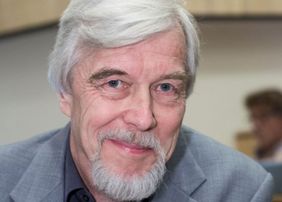 Rolf-Dieter Heuer to be President of the German Physical Society from 2016 to 2018. (Foto: CERN)

Bad Honnef, December 5th, 2014 – It is an established tradition of the German Physical Society (DPG) to elect a new President more than one year before the end of the term of office of the incumbent President, so that his/her successor can be inducted as President elect into the complex and responsible role and to ensure continuity in the DPG. The DPG Council has now unanimously elected the current Director General of the European particle physics centre CERN, Rolf-Dieter Heuer, as the next President of the largest physical society in the world with over 62,000 members.

A new President is elected every two years from candidates working in academia, in industry or at non-university research institutes. On 1 April 2016 Heuer will take over from the incumbent President Edward G. Krubasik, who according to the DPG constitution cannot be re-elected. Like his predecessor, Johanna Stachel, Krubasik will then become Vice President.

Rolf-Dieter Heuer (born in 1948) has been Director General of the European Nuclear Research Centre CERN in Geneva since January 2009. His period of office there ends in December 2015. He, too, already has a successor, the Italian physicist Fabiola Gianotti.

Heuer studied Physics at the University of Stuttgart and obtained his doctorate from the University of Heidelberg in 1977. Between 1977 and 1983 Heuer worked on the DORIS and PETRA colliders at Deutsches Elektronen-Synchrotron DESY in Hamburg. His scientific work focused on studying elementary particles and their properties, as well as planning and developing detectors for elementary particle physics.

In 1984 Heuer left Heidelberg for the European Organization for Nuclear Research CERN, where he worked for OPAL – one of the four major experiments on the Large Electron-Positron Collider (LEP). It was there that Heuer co-ordinated the construction of the experiment’s central tracking chamber and was subsequently responsible for data acquisition and analysis. From 1994 to 1998 he headed the OPAL collaboration involving more than 300 scientists.

In 1998 Heuer answered the call to become a C4 Professor at the University of Hamburg. Here he concentrated on the preparatory work for experiments on future electron-positron colliders, and built up one of the world’s leading groups in this field at DESY.

From December 2004 to December 2008 Heuer was Director of Research of Particle Physics and Astroparticle Physics at DESY. He played a decisive part in establishing the Hamburg accelerator centre as the central laboratory for particle physics in Germany, and reinforced collaboration with universities and CERN. He played a leading role in the restructuring and focusing of particle physics research at the highest energy levels in Germany, with particular emphasis on the Large Hadron Collider (LHC), which was commissioned at CERN in 2009 under his leadership. As CERN’s Director General, he also announced the discovery of the long-sought Higgs particle in 2012, oversaw the LHC’s first long shutdown and will lead the commissioning of the consolidated collider in 2015. He also opened the membership of the previously European laboratory to non-European states and prepared CERN for participation in international physics projects not located there.