Our colleague Dr. Wolfgang Seidel passed away suddenly and much too soon on February 20, 2017. He had been a member of the scientific staff at the Institute since 1991. His research field was experimental astroparticle physics, particularly the search for particles of dark matter with detectors based on the use of very low temperatures. 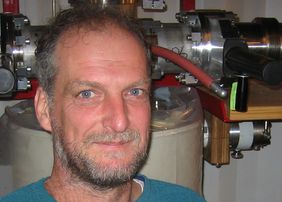 Wolfgang Seidel was a pioneer of this very successful detector concept, which is nowadays used successfully with various adaptations in different scientific areas. The promising results of his doctorate, which he did under Prof. Rudolf Mößbauer at the Technical University of Munich, was the starting point for what was to become the worldwide development of calorimetric detectors with superconducting phase-transition thermometers with SQUID readout.

What motivated this development at that time was the desire to create new possibilities for the detection of neutrinoless double-beta decay, the coherent scattering of neutrinos on atomic nuclei, and what were then the still very exotic particles of dark matter. To be able to undertake this multidisciplinary development successfully, he set up the complete infrastructure in the laboratory and designed and manufactured the detectors. By analyzing and understanding the new findings he could improve the detectors further. The lecture on his work was the highlight of the Low Temperature Detector Workshop in 1989, which helped the detector concept he had developed to its international breakthrough.

After his doctorate, he moved to the Max Planck Institute for Physics, so he could push further ahead with the development of his detector concept. One milestone here was the world’s first successful production of tungsten films with the very low critical temperature of 15 millikelvin, which is usually only achieved with ultrapure single crystals. The production process used for thin tungsten films means they usually have a significantly higher critical temperature.

This success was based on a complex UHV evaporation system, which he had set up during his first year at the Institute. The tungsten film sensors made it possible to achieve energy resolutions of 100 electronvolts with larger detectors for the first time. This provided us with the impetus back then to propose an experiment based on these detectors to search for hypothetical particles of dark matter in the Gran Sasso underground laboratory in Italy.

For the design and construction of the CRESST experiment, Wolfgang Seidel took on the enormous task of developing a cryostat and the infrastructure whereby low temperatures of around 5 millikelvin and an environment with extremely low radioactive background could be developed for the detectors. He brought his great strengths to bear: Knowing exactly which aspects require extreme care and attention – and where things could be simplified. He never lost sight of the goal: To ultimately have an experiment which works well and reliably in the long term. This is a rare talent, which was extremely important considering the many different developments required for the experiment.

In Wolfgang Seidel, we are losing a pioneer, a valued colleague and not least a good friend, whom we will miss very much. His loss will be felt not only at the CRESST experiment.