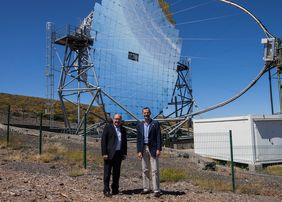 His majesty, the King of Spain (right) and IAC director Rafael Rebolo in front of one of the MAGIC telescopes on La Palma (Picture: Antonio González/IAC)

The Instituto de Astrofísica de Canaria (IAC) on Tenerife was honored by a visit of Felipe VI, King of Spain. The king was the VIP guest at the ceremony for IAC’s 30th anniversary. The next day, the monarch visited also the MAGIC telescopes on the island of La Palma, where he gained insight into the field of astroparticle physics.