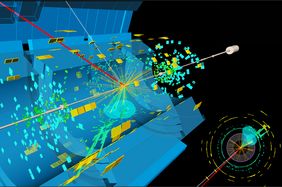 These observations mark a new milestone in the study of the Higgs boson, complementing recent results on production and decay mechanisms of this elementary particle.