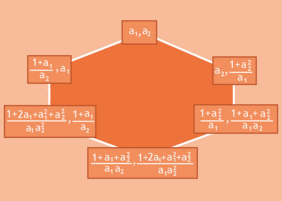 Cluster algebras are interconnected sets of formulas. They were developed from “toy models”, and used for a genuine quantum field theory for the first time. (Graphic: Carolin Leyck)

“We followed a new mathematical path, the cluster algebras”, says Prof. Dr. Johannes Henn, one of the authors of the publication in Physical Review Letters. Cluster algebras were discovered in the early 2000s. They consist of sets of formulas, or clusters, which are related to each other through certain rules. “Cluster algebras are so exciting because they enable numerous links between mathematics and physics”, says Henn.

Together with Dmitry Chicherin (LAPTh Annecy) and Georgios Papathanasiou (DESY Hamburg), Johannes Henn transferred earlier results from a toy model (i.e. a simplified theory) to a real quantum field theory and found astonishing parallels. “We discovered that certain Feynman integrals, which are important for describing our world, can be associated with cluster algebras. We can thus simplify the calculation of the Feynman integrals”, says Henn.

What are Feynman integrals?

In theoretical particle physics, Feynman integrals are used to calculate potential processes in particle collisions, e.g. the formation of particles or their interactions. These processes are illustrated by Feynman diagrams. These are graphic representations, i.e. a kind of visual language that stands for mathematical calculations – the Feynman integrals.

However, because the possible interactions of particles can grow immeasurably, the Feynman integrals and thus also the Feynman diagrams become increasingly complicated – in other words, increasingly untamable. This is where the cluster algebras come into play.

The scientists have discovered that the properties of cluster algebras can narrow down the possible answers in quantum chromodynamics (QCD), which is the quantum field theory that describes the interactions of quarks and gluons, both subatomic particles. The authors focused on four-particle processes that describe the emergence of a Higgs boson and a particle jet from the interaction of two gluons.

“It turned out that the relevant Feynman integrals can be characterized by six polynomials – in other words, sums of multiples in their motion variables”, says Henn. “With a bit of detective work, we were able to connect these polynomials to the clusters of a particular cluster algebra from the toy model”. This connection can explain the structure of previous results and pave the way for new directions in theory. Future calculations can thus be simplified. In some cases, the complicated Feynman integrals can even be avoided completely.

In the toy model, cluster algebra structures were found in various particle processes. Based on their successful further development for QCD, the scientists hope to find out if their findings can be applied to other processes in particle collisions. This would ease the way to finding answers about the building blocks of our world and to expanding our understanding of the mathematical structure.