It’s all about high-energy and astroparticle physics at Wildbad Kreuth from Oct. 4 to 9, 2015, when the Max Planck Institute for Physics hosts this year’s International Symposium on Multiparticle Dynamics (ISMD). Held annually since 1970, the ISMD conference rotates from year to year among different locations. 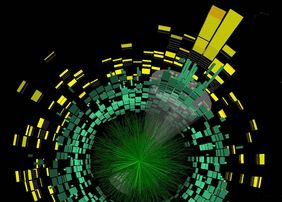 The symposium is concerned with processes in which large numbers of particles are observed and analyzed. Typically physicists observe multiparticle dynamics in collision experiments, for example with the ATLAS detector at CERN, where they analyze particle fragments arising from impacts between protons. But particle showers also occur when highly energetic particles from outer space strike the earth’s atmosphere.

In addition, these experiments and observations contribute to the resolution of open research questions about the composition of matter and its fundamental interactions. In more than 70 talks and posters, scientists will present the latest insights and developments from theory and experiments in particle and astroparticle physics.

The ISMD is funded by the Associazione Franco Rimondi.