Max Planck Day is held across Germany on 14 September 2018. Under the hashtag #wonachsuchstdu (“what are you looking for”), the event is addressed to all those who are interested in research, and would like to get a hands on experience of the topics that the Institutes of the Max-Planck-Gesellschaft are concerned with. In Munich there will be a Science Market with exhibitions, presentations and two science slams. The MPI of Physics (MPP) is taking part with two interesting exhibits that invite visitors to get involved and discover. 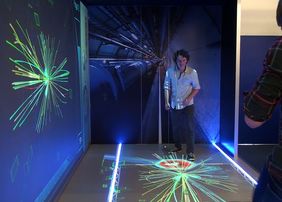 What happens in particle colliders? Visitors can find it out - by playing football with protons. (Photo: Medialab/CERN) 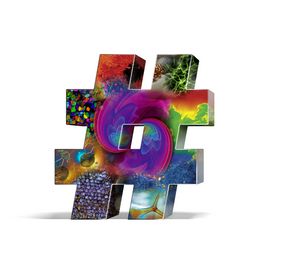 The hashtag #wonachsuchstdu is the motto of the Max Planck Day on Sept. 14, 2018, where scientists show what research topics they are working on.

“Insight must precede application”. This statement was made by Max Planck, who would have turned 160 years old in 2018. It was exactly 100 years ago that the scientist received the Nobel Prize for Physics. The Max-Planck-Gesellschaft was founded 70 years ago, and it has been committed to basic research at a world-class level ever since.

The current areas of research of scientists working for the MPG are presented during Max Planck Day, which is held across Germany on 14 September 2018. One of the main event locations is the science market in the centre of Munich, where the Max Planck Institute for Physics (MPP) is also represented.

The MPP explores the ways in which elementary particles – the smallest building blocks of matter – behave, as well as the forces acting upon them. In their research work, physicists strive to learn more about the universe: How it came to be, how it is structured and how it will develop in the future.

At the science market, the MPP will contribute several talks (in German):
•    2.50 pm: „Does the MADMAX axion-photon converter finally shed light on the dark matter problem?” by PD Dr. Béla Majorovits
•    5.40 pm: "The proton and its unknown nature“ by Dr. Iris Abt
•    7.00 pm: Science Slam with Philipp Gadow, ATLAS PhD student
Moreover the institute shows an instrument from the ATLAS detector at CERN and a large multimedia exhibit.

What do we need particle accelerators for? What happens when protons are shot at each other? A large-scale multimedia exhibit in the cafeteria enables visitors to experience the processes that take place inside the particle accelerator Large Hadron Collider (LHC).

However, particle collision is not only interesting for physicists. Proton beams can also be used in tumour treatment: a computer simulation that visitors may control themselves, shows how this works.

In tent 15, visitors will learn how cosmic radiation particles can be made visible on earth. These are muons, the relatives of the better known electrons but which have a greater mass.

Muons are created through proton collisions in the LHC and they play an important role for particle physics: They led the physicists on the track of the Higgs boson that was discovered by the ATLAS detector in 2012. This is why instruments for measuring muons are extremely important for ATLAS.

The MPP presents such muon chambers and explains how they work. The detectors are developed and built at the Institute. Scientists are currently working on new models: even more particles are expected to collide in the LHC from 2026 – and the muon chambers need to get into shape for this.