Exactly ten years ago, the ATLAS and CMS experiments announced a resounding success: Little less than three years after the launch of the Large Hadron Collider (LHC) at CERN, the last missing piece in the Standard Model of particle physics had been found: The Higgs boson, a kind of messenger of the Higgs field that in turn gives mass to all matter particles. To mark the Higgs birthday, a special issue of the journal Nature published on July 4. 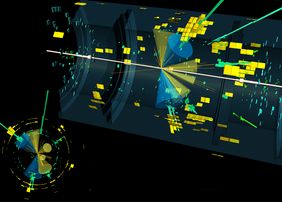 July 4, 2012, was all about the Higgs boson: The particle physics community rejoiced at its success, and there was hardly a newspaper or news program that did not report on the spectacular discovery. Predicted by the theorists Peter Higgs, Robert Brout and François Englert as early as the 1960s, it took almost 50 years until the appropriate "search engine" was ready: the particle accelerator LHC with the experiments ATLAS and CMS. Proton-proton collisions take place there, and physicists have successfully searched the debris for traces of the predicted Higgs particle.

With the Higgs boson, particle physics completed its Standard Model: 12 elementary matter particles, four exchange particles and, as the keystone, the Higgs boson - the only particle without spin. This particle is the manifestation of the Higgs quantum field which fills the universe like a syrup, "sticking" to the other particles as mass.

The tenth anniversary of the discovery is an occasion for a scientific review of the past ten years and to look into the future. Two researchers at the Max Planck Institute for Physics (MPP) have contributed to articles in the current issue of Nature. Sandra Kortner is co-author of an article by the ATLAS experiment reporting on the latest results of the Higgs boson property measurements. Theoretical physicist Giulia Zanderighi takes a look at fundamental questions related to the Higgs boson.

What has happened so far ...

The detection of the Higgs boson was just the beginning for further, intensive studies. Over the past decade, ATLAS scientists have measured the particle's properties with high precision. The focus of the two long measurements at the LHC (Run 1: 2009-2013; Run 2: 2015-2018) has been on the interactions of the Higgs with other particles in the Standard Model.

“The exciting thing is that there is so much to be seen. We have observed how the Higgs boson interacts with the five heaviest known elementary particles, and have good hints for another two“, says Sandra Kortner, who leads a research group on LHC physics at MPP. “The results actually fit very well with theoretical predictions which became much more accurate over time.”

Since the Higgs discovery, a total of almost 30,000 Higgs bosons have been observed with the ATLAS detector. A few weeks ago, the run 3 started at the LHC, which will last until 2025. Sandra Kortner: "After that, we will be able to characterize Higgs boson and its interactions with elementary particles even more precisely and, while doing so, potentially come across new discoveries."

... and may happen in the future

The second review article sheds light on the Higgs boson and the findings to date from a theoretical perspective. Moreover, the authors outline various scenarios that could be experimentally detected in Run 3.

One example is interactions with lighter particles in the Standard Model - in particular, muons and charm quarks. "Further measurements could also show that the Higgs boson is not elementary, but has a substructure," says Giulia Zanderighi, director of MPP's “Novel Computational Methods in Particle Physics” division.

In addition, the Higgs boson offers exciting tie-ins to other major topics in particle physics. "For example, the Higgs could be involved in inflation, which is the abrupt expansion of the early universe," Zanderighi explains. "In addition, the Higgs could be a kind of portal to dark matter. And the question of why there is matter in the universe, but hardly any antimatter, might also be related to the birthday child.”