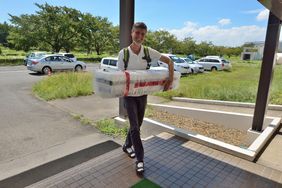 The new SuperKEKB reported the first particle collisions just a few months ago, and the Belle II detector is now also nearly complete. After successful <link en what-s-new news detail belle-ii-erfolgreicher-einbau-des-beast-detektors external-link-new-window internen link im aktuellen>testing with BEAST, the vertex detector – the final component of Belle II – will be installed over the next few months. This detector is located directly at the point of collision and measures the decay events with maximum precision.