Until now, all experiments have been unable to detect the mysterious dark matter. All? Not quite. The DAMA experiment has been providing reliable signals for more than 20 years. The problem: To speak of a discovery in science, signals of dark matter have to be confirmed in other experiments. With a new, creative approach, scientists hope to find out what the DAMA results are all about. Recently, the COSINUS experiment has been approved by the Gran Sasso laboratory. The set-up can begin. 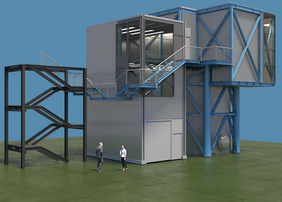 The results from the DAMA experiment are indeed sensational. This is because they correspond exactly to the expectations of physics. “Dark matter surrounds the center of our galaxy like a cloud”, says Karoline Schäffner, head of the COSINUS group at the Max Planck Institute for Physics (MPP). “Because our solar system orbits this center and the Earth orbits the Sun, the bombardment by dark matter particles should fluctuate throughout the year and peak in June”.

Indications but no proof

DAMA has observed exactly this variation. However, to this day no other experiment could not confirm these results. With COSINUS, a research team is launching a fresh attempt to do so. The idea came from Karoline Schäffner and Florian Reindl from the Institute of High Energy Physics (HEPHY) and the Technical University in Vienna, who is leading the project as speaker: “Like DAMA, we will use detectors made of sodium iodide – but combine them with a second detection channel”.

The approach of COSINUS is to run sodium iodide crystals at extremely low temperatures. A dark matter particle would leave two traces when it hits the detector: a short flash of light and an infinitesimal increase in temperature, which can be measured using a special thermometer.

Will the mix of methods provide clarity?

“By combining temperature and light measurements, we can clearly distinguish dark matter from other particles”, says Schäffner. "The temperature sensor is unique and well-proven. Colleagues at MPP originally designed it for the dark matter experiment CRESST. In the meantime, it is manufactured there for both experiments”.

From 2016 to 2019, the group of Schäffner and Reindl developed and tested sodium iodide detectors. They proved that the material is suitable for use at very low temperatures just above absolute zero (-273°C), something that no other team had ever achieved before.

The experiment in the mountain

At the of December 2020, COSINUS received the go-ahead from the scientific management of the Laboratori Nazionali del Gran Sasso (LNGS). The laboratory is located in a branched tunnel system in the Gran Sasso, 1,500 m below the mountain. There it is protected from cosmic radiation, which would affect the sensitive measurements.

Construction of the experiment will probably begin mid-March 2021, and the first measurements will start in 2022. The scientists expect initial results in 2023. COSINUS consists of a water tank with a height and diameter of 7 m. It protects the detectors located inside the tank from natural radioactivity. Above this is a clean room in which the detectors are prepared and installed in the experiment.

The technical planning is in the hands of the Construction Department of MPP. This team is supported by other engineers and the LNGS. The start-up financing for the project was provided by the Istituto Nazionale di Fisica Nucleare (INFN). In 2019, COSINUS secured a € 3 million grant from the Max Planck Society. In addition to the MPP, HEPHY, and TU Vienna, the INFN (Italy) and the Helsinki Institute of Physics (Finland) are also involved. The detector crystals are produced at the Shanghai Institute of Ceramics (SICCAS).