The Max Planck Institute for Physics commemoratds its 100th anniversary. On October 1, 1917, the former Kaiser Wilhelm Institute for Physics started operations with Albert Einstein as director. The MPI for Physics celebrated its jubilee with a scientific symposium that took place from October 10 to 12, 2017. The celebrations to mark the Institute’s centenary dree to a close with a ceremony and evening festivities. 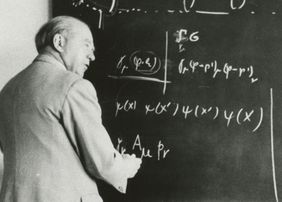 Werner Heisenberg at the blackboard: He was a long-term director and one of the most influential scientists at the Max Planck Institute for Phyiscs, also known as Heisenberg Institute. (Photo: Gerhard Gronefeld)

In October 2017, the Max Planck Institute for Physics (Werner Heisenberg Institute) recalled its 100-year history. In honor of this occasion, the Institute hosted a symposium from October 10 to 12. Renowned international scientists were looking back at the historical developments in (particle) physics – and discussing current, exciting research questions in this field.

Bavarian Minister of State Ilse Aigner, city councilor Kristina Frank and the President of the Max Planck Society, Prof. Dr. Martin Stratmann, accepted the invitation to attend the celebrations on October 12, 2017. Prof. Dr. Siegfried Bethke, Director at the MPI for Physics, gave the ceremonial address. An evening program with physics cabaret and live music rounded off the festivities.

At the beginning of the 20th century, Einstein and his mentor Max Planck ushered in a new era of physics with quantum theory and the theory of relativity. The Nobel Prize in Physics was awarded to Planck in 1918 and Einstein in 1921 in recognition of this work. In 1922, Max von Laue, also a Nobel Laureate in Physics (1914), became Deputy Director of the Institute.

When the National Socialists seized power in Germany in 1933, Einstein emigrated to the USA later that same year. The Dutch physicist and 1936 Chemistry Nobel Laureate, Peter Debye, headed the Institute after Einstein had left.

In 1938, the Institute moved to a research building in Berlin-Dahlem, funded by the Rockefeller Foundation. The research fields of the then Institute included nuclear, low-temperature and high-voltage physics in addition to quantum physics and the theory of relativity.

Shortly after the outbreak of war in 1939, the Institute was subordinated to the German Army Ordnance Office. Together with other physicists, including Otto Hahn and Carl Friedrich von Weizsäcker, Werner Heisenberg, then a scientist at the KWI for Physics, was seconded to the uranium program which had been initiated there – with the aim of investigating possible civil as well as military applications of nuclear fission.

When the attempt to enrich uranium 235 – imperative for the construction of an atomic bomb – eventually failed, the Institute was returned to civil applications again in 1942. Werner Heisenberg was appointed Director.

In the years that followed, a variety of spin-offs emerged from this MPI. In 1960, the MPI for Plasma Physics was set up. The sub-Institute for Extraterrestrial Physics was founded in 1963, the Department of Astrophysics moved to Garching in 1979. Since 1991, the two former sub-Institutes have been autonomous Max Planck Institutes for Astrophysics and Extraterrestrial Physics.

The current research focus of the MPI for Physics is theoretical and experimental particle and astroparticle physics. The scientists here explore the origin and the interactions of elementary particles and forces – and their significance for the evolution of the universe.