How can we investigate the smallest building blocks of the universe, the elementary particles? That question will be answered by the International Master Classes in Elementary Particles, which takes place at the Max Planck Institute for Physics (MPP) in Munich on 5 April. The classes focus on handling real data from the ATLAS experiment at CERN: The participants learn how the detector and data analysis work – and are able to gain some hands-on experience. 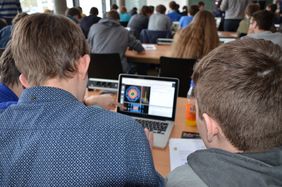 What can we learn from ATLAS particle tracks? Students participating in the Masterclasses at MPP. (Photo: B. Wankerl/MPP)

Particle physicists explore the smallest building blocks of matter, elementary particles. Their subject is so small that it cannot be observed. In theory. But scientists have found ways to make the infinitesimally small visible.

In accelerator systems such as the Large Hadron Collider at CERN, particles are first flung around a circular track before they collide with each other at high energy. What emerges − a chaotic pattern of particle tracks − provides important information for physicists. The famous Higgs boson was discovered in this way, for example, and it is hoped that the data will also reveal particles of dark matter or supersymmetry.

On 5 April 2017 students will once again have an opportunity to learn about the methods of particle physics in theory and practice. The one-day course is aimed at 15-to-19-year-old students from Munich and the surrounding area.

Following an introduction to particle physics and the ATLAS detector, the afternoon will be devoted to data analysis. The finale and highlight of the programme will be a live video conference. Along with other students, the Munich participants will be able to discuss their results with scientists at CERN.

On 4 April 2017, ATLAS scientists are also offering teacher training with a presentation and data analysis.

It is organized by  the Chair for Elementary Particle Physics at the physics faculty of LMU, the Cluster of Excellence Universe of TUM and the MPP. The Munich offer is part of the International Particle Physics Master Classes, which will be held from 1 March to 11 April 2017. 210 universities and research institutes from 52 countries that are contributing to the four experiments at the Large Hadron Collider at CERN are involved. Some 13,000 participants are expected this year.