First signs of life for the particle accelerator SuperKEKB: Lately electrons and positrons have begun making their rounds in the modernized facility of the Japanese research center KEK. The first collisions electrons and positron beams are expected in the year 2017. Studies of the particles these collisions produce and their disintegration should help answer the question of why there is matter in the universe but hardly any antimatter. The decay products will be analyzed with Belle II – a detector developed with significant participation by the Max Planck Institute for Physics (MPP). 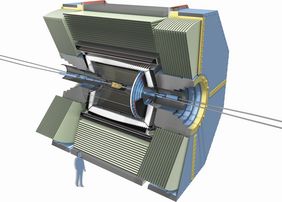 What has "seen" the first circulating positrons is a test detector developed at the MPP. With the successful retention of the beams in both accelerator rings, the ambitious research program is admittedly still at the beginning – it will be two years before the first measurements can take place. Toward this end the accelerator, formerly known as KEKB, has undergone five years of upgrades to become SuperKEKB. With the technical improvements, it should be capable of achieving collision rates many times higher than its predecessor.

Out of Belle, Belle II emerges

More collisions, however, also will mean more particle decays that need to be analyzed. Experts anticipate that in the future 50 times more data than before will accumulate. Therefore, in parallel with the accelerator, scientists and engineers are also improving the measuring instrument (1). Out of Belle emerges Belle II: a detector that will precisely record and measure the results at the point of collision – there, where new particles of interest for the antimatter question will come into being.

The scientists' main interest is oriented toward the so-called B mesons. These are tandems consisting in each case of a heavy b-quark and a light antiquark. The expected, minimal difference in the decay of the B mesons and their antiparticles could account for the surplus of matter in the universe.

"Because the B mesons are very short-lived, we can only detect them indirectly, by following their decay products," explains MPP scientist Christian Kiesling. "With the help of our novel pixel vertex detector, we can precisely reconstruct the point of origin of the particle tracks, in spite of the high background signal."

Before the beauty comes the beast

Before the highly sensitive "beauty" Belle II is installed in SuperKEKB, the scientists will first observe the collisions with a test detector. This one carries, with a nod to the famous story, the name BEAST (Beam Exorcism for a Stable Experiment). (2)

Because there will be a big increase in the frequency of background events with SuperKEKB, it will take a fair amount of effort to filter out the valuable physics data," Kiesling says. "The BEAST detector will help us to optimally adjust the accelerator and the measuring instruments to each other – and this in turn will help us avoid damaging our new vertex detector later on."

(1) Around 600 scientists from 23 countries are participating in development of the Belle II detector.
(2) "Beauty and the Beast," a traditional French fairy tale (original title: "La belle et la bête").