The Max Planck Institute for Physics (MPP) reinforces its Theory Department: Under the leadership of Angnis Schmidt May, the group “Gravitational theory: Massive spin 2 fields” studies the gravitational force and its theoretical description. The scientist also lectures at the chair for Mathematical Physics and String Theory at LMU Munich. 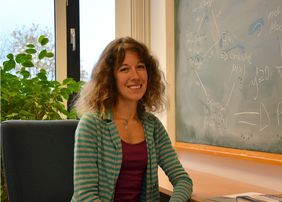 The new Max Planck Research Group's topic is the gravitational force, described by Albert Einstein 100 years ago in the general theory of relativity and which still holds true today. Angnis Schmidt-May aims to expand the theory to find answers to unexplained questions on the evolution of the universe.

One of the core questions is which particle is involved in gravitation: in contrast to the other fundamental forces in the universe – the electromagnetic, the weak and the strong forces – no gravitational force carrier is known to date.

Einstein's theory describes the putative “graviton” as a massless particle. Schmidt-May and her Group investigate whether an additional, similar particle may exist, but possessing mass. Here, she also addresses the question of the impacts the new physical model may have on cosmology.

At the heart of her research is the so-called “ghost-free bimetric theory”. This describes the interaction of a massive particle with the massless graviton, each being spin-2 particles. When extending the gravitational theory to include a massive particle, an instability (a ghost) is very likely to occur. For this reason the construction of the extended theory needs to avoid the ghost.

After her physics degree course at the University of Heidelberg, Angnis Schmidt-May obtained her doctoral degree at the University of Stockholm. From there, she attended ETH Zurich for several months as a postdoc on a research residency, before being appointed as an Assistant Professor at LMU in 2016. She has headed the group “Gravitational theory: Massive spin 2 fields” at the Max Planck Institute for Physics since early October 2017.

How did you arrive at your current research topic – did you approach it consciously or was it a gradual development?

Cosmology has always been my primary interest and was my research objective even when I began my degree course. At the same time, mathematical structures fascinate me, and I therefore gradually turned in a more theoretical direction. Today, I am very pleased to be able to work precisely at the interface between fundamental theory and phenomenology.

How do you choose staff for your Group?

It is important to me that they show enthusiasm for their research and communicate this to the outside world. Research group dynamics thrive on its members enjoying their work and on mutually motivating and inspiring each other. A broad spectrum of interests is also beneficial, in particular because my group works on both highly theoretical and applied topics.

When and how did it become clear to you that you wanted to study physics?

My father studied physics and my mother also inspired me from a very early age. It was already clear to me when I began grammar school that a physics degree would be the right thing for me. I also found mathematics very interesting, but I need the link to observable phenomena.

You are very active in sports – you sail, run in marathons and compete in bicycle races. How well can these activities be reconciled with your research activity?

They complement each other well, I need to balance the office work with movement. During the week I cycle to work (a good 30 kilometers a day) and at the weekend I train for long-distance runs or travel to the Alps to walk or snowboard. Only sailing falls somewhat short at the moment, unfortunately, because I'm too far from the sea.