The SuperKEKB accelerator in Japan is still “awaiting” the arrival of “its” detector: Belle II. In a few months, the detector is to be inserted into the accelerator ring for the first time – the first measurements are planned for 2018. The MPP projects for Belle II continue to make good progress: At the moment, the silicon modules for the central pixel detector are being bonded. In Belle II, these instruments will provide a very accurate determination of where exactly B mesons decay. MPP scientists put the Belle II cooling system into operation several few weeks ago now. 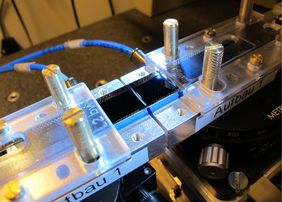 The Munich representatives in the Belle II collaboration are the Max Planck Institute for Physics and the Semiconductor Laboratory (HLL) of the Max Planck Society. They are members of the research alliance which is developing the pixel detectors in Belle II.

To be more specific, both institutions are working on the instrument which is located in the immediate vicinity of the collision point: The double layer high-resolution pixel detector, which will be used to reconstruct tracks left by charged particles which form during the electron-positron collisions in SuperKEKB to within a few thousandths of a millimeter. Scientists are thus able to accurately analyze the decay paths of B mesons. The experiment aims to clarify why antimatter has largely disappeared from the universe.

The MPP is currently working on bonding together the silicon detectors produced in the Semiconductor Laboratory to form longer units. Two modules are joined together along their narrow sides – really finicky work, because the supporting surfaces measure only half a millimeter. “Since the bonded components are very fragile, we give them additional strength with ceramic pins, which are put into grooves in the silicon,” explains Hans-Günther Moser, project leader at the MPP.

The pixel detector is constructed from 20 double silicon modules. “In this experiment, it is the precision with which the particle tracks can be traced which is of primary importance,” explains Moser. “The important thing is: The less material there is, the less the particles are deflected.” The detectors are therefore only around 75 micrometers thick in the sensitive area, this corresponds to the diameter of a human hair. This strategy pays off: The researchers from Munich have constructed the thinnest silicon detector in the world with a radiation length of only 0.21 percent.

The individual pieces which are currently being produced are prototypes. Series production for around 80 modules will start in May.

In addition to the pixel detector, the MPP has developed a special carbon dioxide (CO2) cooling system for Belle II. Its task is to chill the electronics of the pixel detector. Liquid CO2 is a highly efficient coolant which can be used to realize very compact cooling loops, ideal for the Belle II pixel detector. This chiller was installed at the experiment a few weeks ago.