From Sept. 9 to 11, 2015, scientists of the CALICE collaboration will be meeting at the Max Planck Institute for Physics. In this project researchers are developing novel detectors to be used in future particle accelerators. The detectors measure the energy of particle fragments that are produced in collision experiments. 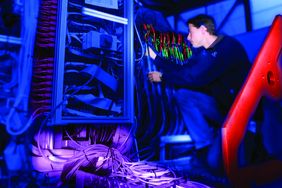 Test measurement at Fermilab near Chicago: Frank Simon at the calorimeter of the CALICE Collaboration (Picture: Reider Hahn/Fermilab)

Although the LHC accelerator at CERN has not yet reached its full operating potential, physicists are already thinking about possible successors. The goal is to investigate with greater precision the origin of mass, the riddle of dark matter in the universe, and the question of new particles, forces, and dimensions.

In parallel with new accelerator concepts, scientists are also devising the next-generation detectors that will enable them to analyze the particle collisions.

With the calorimeters developed by CALICE, particle showers can be traced with unmatched precision: When highly energetic subatomic particles encounter the detector material, the disintegration tracks can be traced, time-resolved, in all three spatial dimensions. Thus researchers can better reconstruct and interpret the collision events.

Up to now, the scientists participating in CALICE have tested prototypes of several different calorimeter technologies. These experiments have delivered valuable insights: for instance, about how particle showers interact with the detector material — and what conclusions can be made about the original elementary particles.

In this way CALICE is contributing not only to the development of new technologies, but also to the improvement of simulations of the LHC experiments as well as future particle physics projects.

The CALICE project’s successes to date form the basis for further developing highly granular calorimeter technology specifically targeted at linear accelerators — a possible accelerator model for the future. Thus the technology could be applied, for example, in the International Linear Collider, which is under discussion as a major project of fundamental research in Japan.

In addition a current experiment, CMS at the LHC accelerator, will be upgraded with CALICE technologies. The goal is to prepare CMS for the extremely high collision density that the LHC will attain in its “high-luminosity” phase beginning in 2025.

The technologies developed by CALICE are also finding application in other areas, for example in medical imaging techniques.