Many experiments in astroparticle physics need to be protected from radiation. For that reason, they are frequently located deep under the earth's surface. For a new underground laboratory in China, the Max Planck Institute for Physics and the Tsinghua University in Beijing have jointly developed and tested new scientific concepts. The scientists will discuss the results of their three-year collaboration in a symposium from Oct. 18 to 24, 2015. 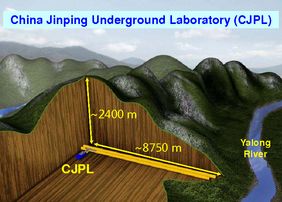 The world's deepest underground lab is being constructed in a supply tunnel for the Jinping dam. (Picture: CJPL)

Billions of particles from the cosmos strike the earth every second. Why don't we notice? Most particles pass undisturbed through matter, leaving no trace behind.

The constant cosmic bombardment does, however, interfere with many experiments. For example, when physicists are searching for hitherto unknown particles, such as dark matter, which is five times more abundant in the universe than visible matter. Or when they are searching for very rare particle decays that might, if found, explain why there is matter in the universe but hardly any antimatter.

"In astroparticle physics, we're searching for rare particles or events that we have to distinguish from background events due to cosmic radiation," explains Dr. Iris Abt of the Max Planck Institute for Physics.

Germanium detectors for the Jinping Laboratory

The Gran Sasso mountain in central Italy is the site of the world's largest underground laboratory – so far: The China Jinping Underground Laboratory (CJPL) will break all previous records. Eight 64-meter-long experiment halls, situated 2400 meters below the surface, are under construction close to the Jinping Dam in southwestern China. This will make the new laboratory not only the largest of its kind, but also the best shielded.

For three years, the Max Planck Institute for Physics and the Tsinghua University in Beijing have cooperated to develop novel germanium detectors for the Jinping Laboratory. The semiconductor germanium is particularly well suited for two reasons.

"On the one hand, highly pure germanium makes it possible for us to detect dark matter signals," explains Iris Abt. "On the other hand, one isotope of germanium, 76Ge, is a candidate for the theoretically possible, but extremely rare neutrinoless double-beta decay." If such decay is observed, it would prove that neutrinos are their own antiparticles – an important step toward understanding the excess of matter in the universe.

During the three-year collaboration, the scientists have successfully tested novel detectors. The closing symposium of the cooperation, which also included the University of Tübingen and the Shanghai Jiao Tong University, will take place from Oct. 18 to 24 at the Schloss Ringberg conference center overlooking the Tegernsee. The project has been supported by the Sino-German Center for Research Promotion in Beijing. Beyond the purely scientific aspects, Iris Abt is pleased about the intercultural exchange. "The joint effort has contributed to a deeper intercultural understanding. Fundamental research plays an important role in developing the future terms of cooperation between nations. The way worldwide cooperation works in science can help pave the road for cooperation in other fields."