Turbulent processes take place close to supermassive black holes, which lurk in the centres of nearly all galaxies. They swallow up matter flowing in from the outside while at the same time producing so-called gas jets which shoot out into space in two opposite directions. Researchers at the Max Planck Institute for Physics in Munich and the University of Geneva have now succeeded in localizing the origin of the high-energy gamma radiation in such a jet: it apparently originates very close to the black hole. This discovery was made possible by a micro-gravitational lens effect that occurs by chance and selectively amplifies the light from different regions close to the black hole like a magnifying glass. 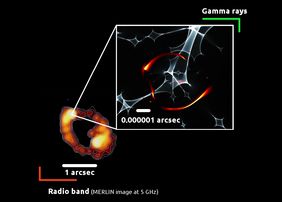 Looking at a distant galaxy: The radio chart (left) shows the image of the blazar PKS 1830-211 distorted by the gravitational lens effect. The detail on the right is a simulation of the micro-gravitational lens effect in the gamma ray region; direct observation of the orange ring – it also represents images of the blazar – is not possible due to its small size. (Image: Patnaik et al. 1994, Liege Conference on Gravitational Lenses and the Universe / Vovk)

Astronomers are aware of many active galaxies which emanate such jets from their centre. These gas jets can be seen in the radio region, and occasionally in visible light and in the X-ray and gamma radiation regions as well. There is still a great deal of uncertainty about the mechanism of their formation. What is clear is that hot gas in the form of a disk orbits the central black hole. It is probable that strong magnetic fields, which accelerate the particles at right angles to the disk and into the jets, occur here as well.

This central machinery cannot, however, be observed directly from Earth due to the large distances involved. A stroke of luck helped Ievgen Vovk from the Max Planck Institute of Physics and his colleagues in Geneva here. The researchers looked at an active galaxy known as PKS 1830-211. This is a blazar – a rare case in which one of the two jets happens to be directed towards Earth so that the astronomers look directly into the jet along the longitudinal axis.

It so happens that there is a galaxy roughly half way between Earth and the blazar, which is billions of light years away. Its strong gravitation causes the space around it to curve. The light of the blazar behind it passes through this space well and takes a detour – as if it were passing through a lens. PKS 1830-211 thus appears in the sky as two images; and these images are brighter than the blazar would be without this lens effect.

Astronomers had already recorded intensity flare ups in the radio region which originated from events in the blazar. Since the light propagation paths of the two images are different in length, they do not light up simultaneously after a flare up, but around 26 days apart. Vovk and his colleagues have now scoured the data from the Large Area Telescope on board the Fermi space telescope looking for such flare ups in the gamma ray region.

The resolution of the telescope here is not sufficient to be able to image the two pictures separately, but the astronomers also found flare ups which occurred periodically with an almost constant delay. “The period was approximately as long as that in the radio region, but the amplification factors of the intensity were much larger and more variable,” says Ievgen Vovk.

This behaviour and further findings from observations can be best explained with an interesting assumption: Although the brightness variations in the gamma ray region also originate from the flare ups in the blazar, they are amplified to different degrees by the gravitational lens effect of individual stars in the foreground galaxy. This always occurs when a star happens to pass in front of the gamma ray emitting part of the blazar as seen from Earth.

The splitting of the images produced here is so small as to be unobservable. “It would correspond to the size of an ant on the Moon,” says Vovk. Astrophysicists call this a micro-gravitational lens effect. However, the intensity amplification of the images by factors of two to seven is much greater than in the radio region. The stars thus briefly highlight the gamma ray region, as it were, as if through a magnifying glass.

All findings can be best explained in the context of the micro-gravitational lens effect with a very compact gamma ray region which extends over several ten billion kilometres. This corresponds roughly to the diameter of our solar system or to that of a black hole with a mass of one billion solar masses.

“According to our findings, the gamma ray region is only slightly larger than the black hole itself,” says Andrii Neronov from the University of Geneva. Since the jet originating from the centre widens with increasing distance, the gamma radiation is probably being generated very close to the black hole, i.e. quasi at the foot of the jet.

How this radiation is generated is still not known. According to the most prevalent theory, the black hole and the gas disk are surrounded by a strong magnetic field in which particles such as electrons are accelerated to almost the speed of light. These can collide with light particles (photons), transferring so much energy to the particles in the process that they become gamma or X-ray photons.