Prof. Johanna Wanka, federal minister for education and research, recently toured the Belle II experiment at the Japanese accelerator facility KEK. The Belle detector is currently being modernized to analyze particle tracks more accurately in the future. The Max Planck Institute for Physics (MPP) leads a research collaboration responsible for developing and building the innermost detector of Belle II. 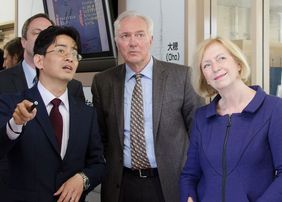 The visit took place on the occasion of a meeting of the G7 research ministers in Tsukuba, Japan. That also is the location of the particle accelerator where, in 2018, the Belle II detector is expected to record the first collisions of electrons and their antiparticles (positrons). With this data the scientists hope to find an explanation why antimatter disappeared from the universe.

MPP scientists are the leading collaborators in development of the central pixel vertex detector (PXD) in the Belle II experiment. The PXD has the task of exactly charting the decay site of the particles produced. From that the physicists deduce differences in the decay patterns of the particles and their antiparticles – information that should contribute to solving the antimatter puzzle.

MPP scientist Christian Kiesling, speaker of the PXD collaboration, informed the minister in detail about the research goals and progress of the project. Wanka showed great interest in the scientific questions that Belle II will tackle. She was particularly impressed with the feats of engineering that made construction of the detector possible in the first place.