After the discovery of the Higgs boson at the Large Hadron Collider (LHC) in 2012 the particle physicists have been working even harder on the study of the properties of the Higgs boson and on the search for new particles. Particle physicist from all over the world will meet at the Max-Planck Institute for Physics in Munich for the ATLAS Higgs-ZZ Workshop from April 26 to April 29 to discuss further steps for the analysis of new LHC data. 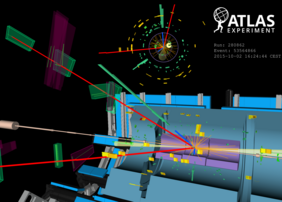 In spite of its great success in describing particle reactions the Standard Model is known to be incomplete. It does not contain the particles of the dark matter in the universe, for example. The precise measurement of the properties of the Higgs boson decays into pairs of Z bosons can provide the scientists with hints of the properties of the complete theory of elementary particles. Also motivated by the recent observation of an unexpected excess of events with two photons at a particle mass of 750 GeV, searches for new Higgs-like heavy particles decaying into Z boson pairs are pursued.

At the ATLAS Higgs-ZZ Workshop particle physicists from the ATLAS experiment will discuss how to search for extensions of the Standard Model most efficiently and most effectively. On Friday, April 29th, they will also meet with renowned theoretical physicists, to widen the discussion.