Lena Funcke completed her doctorate at the Max Planck Institute for Physics at the age of just 23. For her outstanding doctoral thesis, she receives the Dieter Rampacher Prize, which is awarded annually by the Max Planck Society to its youngest doctoral researcher to obtain a PhD. 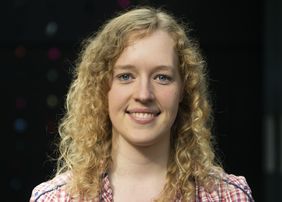 In her thesis (*) Lena Funcke developed, together with her supervisor Georgi Dvali, models beyond the Standard Model of particle physics that have far-reaching implications for our understanding of the recent evolution of the universe. "The fascinating aspect about my research was that it was truly interdisciplinary and combined knowledge from theoretical particle physics, gravitation, cosmology and astrophysics," says Lena Funcke, now a postdoctoral researcher.

Lena Funcke remains true to her research interests also after her doctorate: since summer 2018, she has been working as a postdoctoral fellow at the renowned Perimeter Institute in Canada on how to experimentally confirm her models using cosmological and astrophysical data.

Already early on in her doctoral studies, Lena Funcke had the special honor to take part in the 2016 Lindau Nobel Laureate Meeting in Physics together with two colleagues from the Max Planck Institute for Physics – a formative experience as she recalls: "It was inspiring and insightful to discuss my model on neutrino masses with researchers such as Arthur McDonald and Gerard 't Hooft. The meeting also resulted in a new research collaboration, the results of which we recently published in a journal."

The award ceremony will take place during the Max Planck Society’s Annual General Meeting in Hamburg in June 2019. The prize was endowed in 1985 by Hermann Rampacher in memory of his brother Dieter, a student of physics at the TH Stuttgart who was killed in action in 1945 at the age of twenty.

(*) How Gravity Shapes the Low-Energy Frontier of Particle Physics: Neutrino Masses and the Domestic Axion. Note: After the publication of this text, Lena Funcke was awarded the Arnold Sommerfeld PhD Prize for her thesis.