Today the collaboration for the LHCb experiment at CERN’s Large Hadron Collider announced the discovery of two new baryons. The particles, known as the Xi_b'- and Xi_b*-, were predicted to exist by the quark model but had never been seen before. 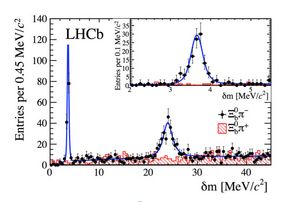 “Nature was kind and gave us two particles for the price of one" said Matthew Charles of the CNRS's LPNHE laboratory at Paris VI University. (Image: LHCb)

"Thanks to LHCb's excellent hadron identification, which is unique among the LHC experiments, we were able to separate a very clean and strong signal from the background. It demonstrates once again the sensitivity and how precise the LHCb detector is”, said Steven Blusk from Syracuse University in New York.

The measurements were made with the data taken at the LHC during 2011-2012. The LHC is currently being prepared - after its first long shutdown - to operate at higher energies and with more intense beams. It is scheduled to restart by spring 2015.