The radio galaxy IC 310 in the Perseus constellation is approximately 260 million light years away from Earth. Astronomers assume there is a supermassive black hole at its centre. This black hole was the setting for an extremely powerful outburst of gamma rays which was observed by the MAGIC telescopes on La Palma in the Canary Islands. The source exhibited one of the fastest radiation variations which researchers have ever been able to detect in an extragalactic object at these energies. 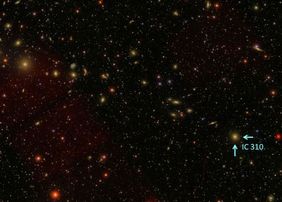 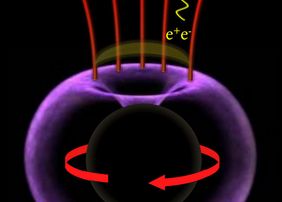 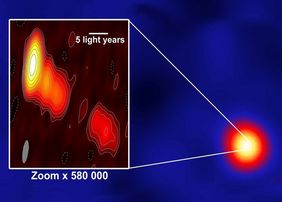 Galaxy in false colours: The chart shows IC 310 in the gamma ray range. The inset zooms into the centre of the galaxy and shows details of the jet, taken in the radiowave range by the European VLBI Network. (Image: MAGIC Collaboration)

In the course of the outburst, the strength of the measured radiation from the core of the IC 310 galaxy varied within only five minutes, much to the surprise of the researchers. Yet the event horizon of the black hole – the boundary surface in space-time beyond which events are no longer visible – is three times the distance between Sun and Earth, i.e. 450 million kilometres. Light would need at least 25 minutes to travel this distance.

“No object can suddenly light up its entire surface faster than light takes to travel across it,” says Julian Sitarek from the Institut de Fisica d'Altes Energies (IFAE) in Barcelona. And MAGIC spokesperson Razmik Mirzoyan from the Max Planck Institute for Physics in Munich adds: “The region from which the gamma radiation originates must therefore be significantly smaller than the event horizon of the black hole.”

This means that the astronomers have apparently observed the black hole with the MAGIC telescopes in great detail. But what is so special about the gravitational trap at the heart of IC 310?

The masses of galactic black holes range from one million to several billion solar masses. If matter falls onto these objects, this occasionally leads to unusually powerful radiation outbursts at wavelengths across the whole spectrum. Such active galactic nuclei (AGN) produce so-called jets, in which the gas is blown into space with approximately the speed of light as if being ejected from a nozzle.

IC 310 in the Perseus galaxy cluster belongs to this class of AGN. The Fermi satellite and the MAGIC telescopes had already discovered the high energy emission of this galactic system back in 2009. But what causes these very fast temporal variations in the radiation?

The researchers assume that the black hole in the nucleus of IC 310 rotates rapidly and is surrounded by a magnetic field. “In the polar regions, there seem to be strong electric fields which accelerate the particles to relativistic speeds, thus generating high energies and ultimately – in interaction with particles of low energies – gamma rays with very fast time variations,” says Masahiro Teshima, a Director at the Max Planck Institute for Physics.

“You can imagine this as lightning in a thunderstorm,” says Karl Mannheim from the University of Würzburg. Every few minutes the lightning discharges the energy it has accumulated in a region the size of our solar system. In the process, particles with relativistic speeds – i.e. close to the speed of light – are ejected into the outer regions of the galaxies.

“When we observe black holes at high energies, we are looking into the galactic nucleus to very great depths. We are trying to look directly into the machinery at the centre, as it were,” says Razmik Mirzoyan.

The jet at the heart of the galaxy was observed with extremely high-detail resolution by the European VLBI Network with the help of the 100-metre radio telescope in Effelsberg. “The complementary effect between MAGIC and the VLBI Network provides us with a unique view into this huge object,” says Eduardo Ros from the Max Planck Institute for Radio Astronomy in Bonn.

According to Mirzoyan, the observations of IC 310 provided initial indications as to how jets form in the vicinity of black holes. And MAGIC’s high sensitivity has enabled it to achieve this result. It was the most suitable instrument of all the imaging Cherenkov telescopes for this kind of research.

MAGIC is located on the Roque de los Muchachos on La Palma in the Canary Islands. The system consists of two telescopes – each with a diameter of 17 metres – and is one of the largest instruments in the world for measuring very high energies. It receives cosmic gamma rays in the range between 25 gigaelectronvolts and 50 teraelectronvolts. The neutral gamma rays penetrate the Earth’s atmosphere and trigger avalanches of secondary particles which emit bluish Cherenkov light. MAGIC investigates galactic and extragalactic sources by taking and analysing stereoscopic images of these Cherenkov flashes. The telescope system is operated by a largely European collaboration, whose members include approximately 160 researchers from Germany, Spain, Italy, Switzerland, Poland, Finland, Bulgaria, Croatia, as well as from India and Japan. The European VLBI Network is an international collaboration with telescopes based in Europe, China, South Africa and additional partners, including the Max Planck Institute for Radio Astronomy in Bonn.