What significance does science have for our society? This question will be taken up at the Max Planck Institute for Physics in the new event series "Science and Society," which takes place for the first time on April 19, 2016. The opening talk will be given by Rolf Heuer, designated president of the German Physical Society and long-time director at CERN. 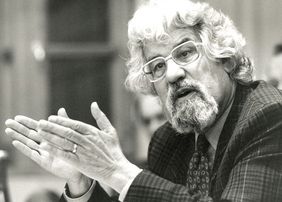 The lecture series "Science and Society" is dedicated to Hans-Peter Dürr. He was committed to peace policy and nature conservation.

The colloquium is dedicated to the memory of former MPP Director Hans-Peter Dürr, who deceased in 2014. In the later years of his career, Dürr became particularly engaged with environmental and sociopolitical issues. He received a number of honors for his activities, including in 1987 the Right Livelihood Award, also known as "the alternative Nobel Prize."

In his talk "Science and Society – Connecting Worlds," Heuer will delve into areas of conflict between science and society: Although our well-being is closely tied to technological and scientific progress, many people regard research with disinterest or even skepticism.

How can science and society find common ground? Using the example of the research institute CERN, Heuer explains how it is possible to arouse people's enthusiasm for the fascinating events in the early universe and engender, in the long term, a better understanding of the natural sciences.

In addition, Heuer demonstrates that purely discovery-oriented basic research also plays a role in technological and medical innovations: Examples include the creation of the World Wide Web, the GPS navigation system, and innovative methods for the early detection and treatment of cancers.

Not least, Heuer points out the sociological aspects of research activities: In physics experiments, as many as several thousand scientists work together. In spite of all cultural, religious, and political differences, research collaborations function remarkably well. Thus science can also help to overcome prejudices and barriers between social groups and nations.

This inaugural lecture in the series Science and Society (Hans-Peter Dürr Colloquium) takes place on April 19, 2016, at 16:15 in the auditorium of the Max Planck Institute for Physics. The colloquium will be a yearly event. Rolf Heuer will give his talk "Science and Society – Connecting Worlds" in the English language. Entry is free.