For the first time, a team from the Max Planck Institute for Physics (MPP) took part in last Thursday’s company run: 13 highly motivated runners completed the 6-kilometer course through the Olympic park, some of them achieving a new personal best. For others, it was their first big running competition. 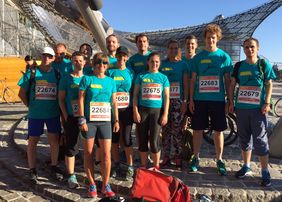 “I am really delighted that we took part in the B2Run,” says Managing Director Allen Caldwell, who was also one of the runners. “I hope we can take part again next year – and maybe persuade more people to join us.”

The temperature outdoors was a pleasant 21 degrees Celsius when the MPP team ran in the last group to set off. Lined up at the start were not only several ambitious marathon runners but also amateur joggers, who particularly enjoyed the atmosphere and the group experience.

“It was not the first run I had taken part in, but usually I have been a ‘solo performer’,” says Evi Linhardt. “To enter as a team with colleagues, line up at the start together and then raise our glasses together at the finish to celebrate our success was great fun!”

And Andreas Hönle adds: “It was a marvelous experience, especially running on the home straight through the marathon gate into the Olympic stadium. I will definitely try to take part again next year.”