The neutrino is the lightest and most mysterious of all elementary particles. It is hoped that a better understanding of its properties will provide answers to many unresolved questions relating to the origin of the universe. In order to study these elusive particles in an efficient way, Raimund Strauss, a researcher at the Max Planck Institute for Physics (MPP) has developed a new method: in future, it will be possible to research the neutrino properties with ultra-light, highly sensitive crystal detectors. For this groundbreaking approach, he will now receive a Starting Grant from the European Research Council (ERC) which is valued at 1.6 million euros. 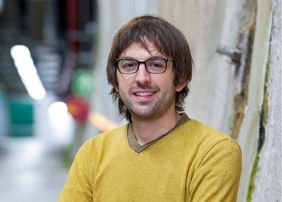 Neutrinos are emitted in radioactive decay, during nuclear reactions that make the stars shine – and when massive stars die in supernova explosions. They were created during the Big Bang and are among the most common particles in the universe: every second, 60 billion neutrinos penetrate an area the size of a fingernail without leaving any trace. Neutrinos have a very low mass, which to date is still unknown, and therefore hardly interact with their environment at all.

The neutrino plays a central role in our understanding of the universe; its properties are therefore the subject of numerous, usually highly complex experiments. The MPP researcher Raimund Strauss has developed a new experimental approach called NU-CLEUS.

With just 10 grams of light crystal detectors, he aims to conduct more in-depth research on the neutrinos, which are difficult to study. The principle is based on an extremely rare, very small, but measurable interaction: A neutrino hits an atomic nucleus in the crystal and recoils - in a similar way to two balls in a game of billiards. In technical terms, this procedure is known as “coherent neutrino scattering”.

With his experiment, Strauss was awarded a prestigous ERC Starting Grant. He will receive 1.6 million euros in order to develop the experiment further and conduct his research work.

“The structure of NU-CLEUS is specifically designed for studying neutrinos with a very low level of energy,” Raimund Strauss explains. “The experiments used to date for this purpose have been very costly and large in terms of technology and costs.” The interesting aspect of NU-CLEUS is also its location: The scientist plans to conduct the NU-CLEUS experiment in direct proximity to a nuclear reactor, where radioactive decay produces a large number of neutrinos within the desired energy range.

The detectors consist of calcium tungstate, a crystal that is already used in the CRESST experiment in the search for dark matter particles. In recent years, in collaboration with the Collaborative Research Centre 1258  at the Technical University of Munich, it has been possible to tune these detectors to low energies with increasing precision: the detectors are one magnitude more sensitive than their predecessors. In addition, a detector variant made of aluminum oxide will be used.

Raimund Strauss is confident that it will already be possible to register the collision of neutrinos with the detector material after just a short period of time. “This is the starting point for detailed measurements, such as the Weinberg angle, which links the electromagnetic to the weak force. We also want to use the experiment to look for sterile neutrinos – a special type of neutrino that could be a candidate for dark matter.”