Researchers in Munich have presented a highly sensitive sensor for precise measurement of particle tracks. This is the first module for the Vertex Detector of the Belle II experiment at the Japanese accelerator center KEK. The detector is expected to start operation in 2017, recording collisions between electrons and their antiparticles, positrons. With this experiment, scientists are pursuing the question of why there is no antimatter to speak of in today’s universe. 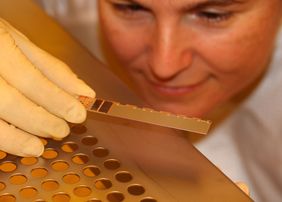 The sensor was developed by the MPG Halbleiterlabor (HLL), the semiconductor laboratory of the Max Planck Society (MPG). The Belle II Vertex Detector is being created in an international collaboration led by the Max Planck Institute for Physics.

In the experiment, scientists bring matter and antimatter particles into collision and analyze the decay patterns of the mesons and corresponding antiparticles produced. “We are searching for infinitesimal differences. For that, precisely spotting the decay location – also known as the vertex – is crucial,” explains Prof. Christian Kiesling, a researcher at the Max Planck Institute for Physics. "These measurements are performed by the recently finished sensor, with characteristics that make it unrivaled worldwide.” "

Made from silicon a thousand times more pure than conventional transistors or memory chips, the module integrates 200,000 DEPFET pixel cells on a surface area of eight square centimeters. (DEPFET stands for “depleted p-channel field-effect transistor.”) It was invented at the MPG HLL and is fabricated there exclusively.

The DEPFET component enables the detection of photons – or, as in this case, of highly energetic particles – with the utmost efficiency and precision. “The fundamental process is very similar to what goes on in a conventional photo or video camera,” explains Dr. Jelena Ninkovic, head of the HLL. “However, the primary signal upon detection of individual photons or particles is very much smaller.”

This is where the major advantage of the DEPFET comes into play: The tiny primary signal is amplified within the sensor itself. Thus the DEPFET is the sensor material and the first stage of amplification rolled into one. Arranging many DEPFETs in a matrix produces an image sensor with which a particle’s point of origin can be precisely determined. “In our case,” Ninkovic continues, “this can be done with an accuracy of around one-hundredth of a millimeter.”

Control of the pixels in a matrix and rapid processing of the DEPFET signals require additional electronics, which have been produced in collaboration with German universities. These electronics, in the form of application-specific integrated circuits (ASICs), are placed directly on the sensor substrate. The ASICs allow digitization of signals from the pixel matrix, as well as lossless data compression, to transmit them at the highest speed (50,000 images per second).

Complex electronics on a hair-thin film

Thus the DEPFET matrix becomes a very complex module with maximal integration density, which despite all its complexity is extremely thin and light, so that the measurement of particle tracks cannot be corrupted by the sensor material itself.

The HLL has developed a unique technology for this purpose that makes it possible to fabricate extremely thin and highly integrated sensor modules. In the process, the sensitive part of the module, the DEPFET matrix, is thinned by a customized etching technique to 75 micrometers, roughly the thickness of a human hair.

These bendable silicon films are supported by a monolithically integrated framework, on which the readout and control electronics are mounted. The power supply and data lines run through a flexible ribbon cable, which is attached to the end of the module.

The HLL technology makes it possible to arrange the thin DEPFET matrices in a cylindrical form, without any further support, around the interaction point of the experiment. With that, the highly precise measurement of particle tracks is becoming reality.