The German Research Foundation (DFG) has given its approval to the Excellence Cluster “From the Origin of the Universe to the First Building Blocks of Life”, or “ORIGINS”. The research network will start work on 1 January 2019. The Max Planck Institute for Physics (MPP) is represented in several research fields in the ORIGINS Cluster. 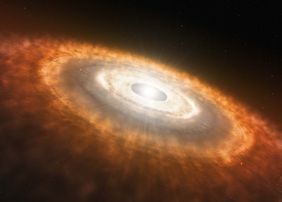 Understanding the development of the Universe and the circumstances under which life began are among the greatest and most difficult challenges facing science. These issues will be investigated by the new Origins Excellence Cluster, which has now been awarded funding by the DFG. It will build on the research insights and structural innovations of the “Origin and Structure of the Universe” Cluster, or “Universe Cluster”.

The work of the new Cluster will also cover the theme of the origin of life, as well as the innermost structure and history of the Universe. Scientists will research the complex processes that led to the Universe that is observable today, and that gave rise to stars, planets and life.

“We congratulate the two Munich universities, the LMU and TUM, on their successful application”, says Dieter Lüst, Managing Director at the MPP. “The new Cluster links research themes from different physics disciplines in a unique way – and poses the intriguing question of how life began. We are looking forward to being a part of Origins.”

The MPP was involved in the Universe Cluster, which was founded in 1997. As members of the leadership committee, Directors Allen Caldwell and Dieter Lüst played a key role in drafting the application for Origins.

The Institute is an active participant in Origins, with more than 20 scientists involved. They are focuses on the “Particles and Forces” and “Particles and Cosmos” research fields in particular. Moreover, they are active in several “Connectors”, nine areas designed to provide the interdisciplinary link between the five focused research fields. The MPP is also playing a leading role in the Origins Data Science Lab, where new data analysis methods are being developed.