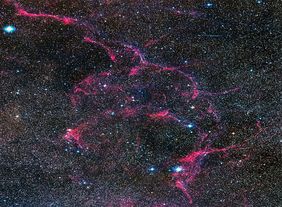 Neutron stars are probably the most astounding objects in the universe. They are the remnants of supernova explosions. The core of a star collapses under its own gravity thereby squeezing matter in such a way that single atomic nuclei are solved in a soup of nucleic particles - mostly neutrons, but presumably also single quarks. It is also possible that a new type of particles is formed – hyperons. They are built of strange matter.

Mathematically the core of a neutron star is defined by a state equation that combines its mass and radius. However, the sizes observed by astronomers don't match theories in particle physics. Prof. Laura Fabietti from the Technical University of Munich uses accelerator experiments to explore what neutron stars are made of. In this Café & Kosmos edition she talks about the current state of research.

The talk will be in German language.