Lena Funcke, Maximilian Totzauer and Sebastian Zell of the Max Planck Institute for Physics (MPP) have been granted a special honor: Together with around 400 other young scientists from 80 countries, the two doctoral candidates will take part in the Nobel Laureate Meeting in Lindau from June 26 to July 1. As every year, Nobel Prize winners active in a particular field will get together with young researchers to discuss current topics and offer assistance with scientific problems. 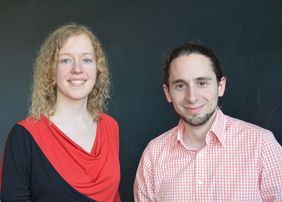 This year's theme is devoted to the field of physics. Thirty Nobel Prize laureates in all have agreed to participate, including physicists Arthur B. MacDonald and Takaaki Kajita, who were honored in 2015 for their achievements in neutrino physics. Lectures and discussion rounds are on the program, as well as social events that give young scientists the opportunity to compare notes and broaden their networks.

Lena Funcke, Maximilian Totzauer and Sebastian Zell were chosen as participants out of several thousand applicants. Worldwide, 144 universities, research organizations, foundations, and companies active in research took part in the selection process for this year's meeting.

Lena Funcke's doctoral research is at the interface between theoretical particle physics and cosmology, with emphasis on quantum anomalies and neutrino masses. A fellow student alerted the Cambridge graduate to the opportunity to apply for the Lindau meeting.

Maximilian Totzauer holds a scholarship from the German National Academic Foundation, which nominated him to participate in the meeting. In his doctoral research he is delving into the production mechanisms for sterile neutrinos as candidates for dark matter.

Sebastian Zell works in the field of theoretical particle physics and cosmology as well. He focusses on the cosmological constant and symmetries in general spacetimes, but he's also interested in other aspects of particle physics.

All three students are very excited about their time in Lindau: "I am looking forward to inspiring lectures and conversations with the Nobel Prize winners – with several of them, I would like to discuss concrete aspects of our latest publication," says Lena Funcke. In addition, Funcke will be seeking out other young scientists with whom she can find and realize new research ideas.

Maximilian Totzauer too wants to discuss questions relating to his own research with scientists at the meeting. "In addition, I would like to exchange ideas about the role of science in society. In that regard, I am especially interested in approaches by which projects can make the latest scientific discoveries useful to society in some way."

"Due to a lack of experimental contradictions the field of theoretical physics may have reached a turning point", Sebastian Zell explains. "Therefore I'm interested to learn what new approaches the Nobel Prize winners consider as promising. However, also looking into the past is exciting: How does an initial idea turn into Nobel Prize winning results?"