The top quark is the heaviest of all elementary particles found in nature. The mass of this point-like particle corresponds to that of the comparatively of the much larger gold atom. One of the production sites for top quarks is the Large Hadron Collider (LHC) at CERN. When protons collide, top quark pairs are created. At the LHC the properties of these special particles can be studied in a controlled environment. 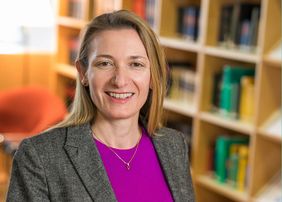 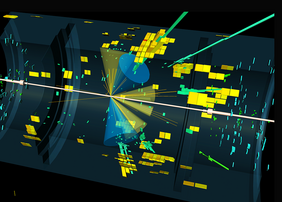 An example for the production of top quarks in accelerator physics: The ATLAS detector measures Higgs boson coupling to a top quark. (Image: ATLAS/CERN)

This is where theoretical particle physics comes in. Calculations play an essential role in accurately predicting the course and results of top quark production. This allows experimental data to be evaluated with high precision.

Together with Javier Mazzitelli and Marius Wiesemann, Giulia Zanderighi, director at the MPI for Physics presents a new, combined computational model, which has recently been published in Physical Review Letters. In an interview, Zanderighi explains the role of these quarks in modern particle physics.

Why are top quarks such an interesting topic?

The top quark has a prominent role in the family of six quarks. It is the heaviest particle in the Standard Model and the only quark heavier than the Higgs boson, which gives mass to all other particles. The top quark is also the only quark that does not form a three-way bond with other quarks. Quarks usually occur in groups of two or three. For example, protons and neutrons consist of three quarks: protons of 2 up and 1 down quarks, neutrons of 1 up and 2 down quarks. Protons and neutrons are also referred to as hadrons.

How was the top quark discovered?

The top quark has existed in theoretical models since the 1960s. Because the top quark is so heavy, given Einsteins E=mc2 relation, one needs a collider with a very high energy to produce it, so  it took quite a long time to discover it. It was not until 1994 that the top quark was successfully detected at the Tevatron accelerator, which was the most energetic accelerator of its time. Since then, the top quark has been the subject of intensive research. By accurately calculating properties of the top quark, we may eventually be able to encounter traces of “new physics” – physics that cannot be explained by the Standard Model of Particle Physics. One indication of new physics would be the observation of small differences between experimental data and theory predictions.

How can top quarks be detected?

When protons collide as at the LHC, top quarks are predominantly created in pairs, that means in a constellation consisting of a top quark and the anti-top quark. Because top quarks decay quite rapidly, they can be detected only via their end products. We have a fairly good understanding of the decay chain. The two top quarks usually decay into a bottom quark and a W boson. Before it can be detected, the W boson also decays: either into quarks, which form groups of three to form a hadron, or into a charged lepton and a neutrino. Also the bottom quark can be detected only indirectly by the formation of stable hadrons.

What role do theoretical predictions play?

Although we know the final states, it is difficult to trace backwards through the previous decay steps. The stable end products could also have been created by other means. The theoretical predictions allow us to define probabilities – and thus to interpret the results correctly. The top quarks created in proton collisions also form part of the unwanted background – in a sense, rubbish data that “contaminates” the actual results in the search for New Physics.

What new calculations has your group introduced?

With our current calculations, we have successfully merged two very different approaches to the problem.

Ten years ago, top quark pair production was calculated in a perturbative expansion in the strong coupling constant up to next-to-next-to-leading order (NNLO), meaning the first three terms appearing in that expansion have been included for the first time. Although these calculations can help us to predict the probability (effective cross section) of top quark formation, they do not allow us to describe the full physical processes by generating particle events as observed in the detectors of the experiments at the LHC. We can address these shortcomings with Monte Carlo event simulations – also known as parton showers. Those, however, do not include the same level of perturbative accuracy.

When evaluating collisions, experimental physicists previously had to choose between the NNLO method and the less accurate but more realistic parton showers. There was no approach to combine the two methods without compromising their accuracy. In our current work, we have achieved just that. Our predictions can simulate top-quark pair production at the LHC more precisely and more realistically than ever before.

What do you expect from the new calculation method? Is there hope for interesting top quark results?

We are already in contact with the two largest experimental groups at the LHC (ATLAS and CMS), which are planning to incorporate our predictions in their top-quark analyses. The unprecedented theoretical precision for top-quark pair production may have an impact in various ways: On the one hand, the extraction of Standard Model parameters like the top-quark mass, the strong coupling constant, or the parton distribution functions, could be performed more accurately.

On the other hand, our calculation might pave the way to discovering new physics through small deviations between measurements and prediction in top-quark processes at the LHC. Not least, the method itself is also of theoretical interest as it opens the door to study other similarly important processes at the same accuracy in future, such as bottom-quark pair production or Higgs production with top quarks.