Never before have astrophysicists measured light of such high energy from a celestial object so far away. Around 7 billion years ago, a huge explosion occurred at the black hole in the center of a galaxy. This was followed by a burst of high-intensity gamma rays. A number of telescopes, MAGIC included, have succeeded in capturing this light. An added bonus: it was thus possible to reconfirm Einstein’s General Theory of Relativity, as the light rays encountered a less distant galaxy en route to Earth – and were deflected by this so-called gravitational lens. 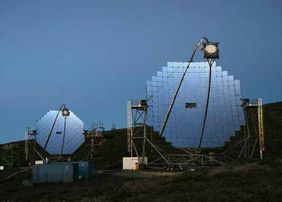 The MAGIC telescopes on the canary island of La Palma (photo: Robert Wagner)

The object QSO B0218+357 is a blazar, a specific type of black hole. Researchers now assume that there is a supermassive black hole at the center of every galaxy. Black holes, into which matter is currently plunging are called active black holes. They emit extremely bright jets. If these bursts point towards Earth, the term blazar is used.

The event now described in "Astronomy & Astrophysics" took place 7 billion years ago, when the universe was not even half its present age. “The blazar was discovered initially on 14 July 2014 by the Large Area Telescope (LAT) of the Fermi satellite,” explains Razmik Mirzoyan, scientist at the Max Planck Institute for Physics and spokesperson for the MAGIC collaboration. “The gamma ray telescopes on Earth immediately fixed their sights on the blazer in order to learn more about this object.”

One of these telescopes was MAGIC, on the Canary Island of La Palma, specialized in high-energy gamma rays. It can capture photons – light particles – whose energy is 100 billion times higher than the photons emitted by our Sun and a thousand times higher than those measured by Fermi-LAT. The MAGIC scientists were initially out of luck, however: A full moon meant the telescope was not able to operate during the time in question.

Eleven days later, MAGIC got a second chance, as the gamma rays emitted by QSO B0218+357 did not take the direct route to Earth: One billion years after setting off on their journey, they reached the galaxy B0218+357G. This is where Einstein’s General Theory of Relativity came into play.

This states that a large mass in the universe, a galaxy, for example, deflects light of an object behind it. In addition, the light is focused as if by a gigantic optical lens – to a distant observer, the object appears to be much brighter, but also distorted. The light beams also need different lengths of time to pass through the lens, depending on the angle of observation.

This gravitational lens was the reason that MAGIC was able, after all, to measure QSO B0218+357 – and thus the most distant object in the high-energy gamma ray spectrum. “We knew from observations undertaken by the Fermi space telescope and radio telescopes in 2012 that the photons that took the longer route would arrive 11 days later,” says Julian Sitarek (University of Łódz, Poland), who led this study. “This was the first time we were able to observe that high-energy photons were deflected by a gravitational lens.”

Doubling the size of the gamma-ray universe

The fact that gamma rays of such high energy from a distant celestial body reach Earth’s atmosphere is anything but obvious. “Many gamma rays are lost when they interact with photons which originate from galaxies or stars and have a lower energy,” says Mirzoyan. “With the MAGIC observation, the part of the universe that we can observe via gamma rays has doubled.

”The fact that the light arrived on Earth at the time calculated could rattle a few theories on the structure of the vacuum – further investigations, however, are required to confirm this. “The observation currently points to new possibilities for high-energy gamma ray observatories – and provides a pointer for the next generation of telescopes in the CTA project,” says Mirzoyan, summing up the situation.