Messier M87 is 55 million light years away from Earth. As is the case for probably all galaxies, there is a huge black hole in its center. In 2017, a host of telescopes observed the object over the entire energy spectrum. The spectacular result of this extensive observation campaign was the famous first photo of a black hole, which was published in 2019. Around 760 scientists from all the observatories involved in 2017 are now publishing more data in the Astrophysical Journal. 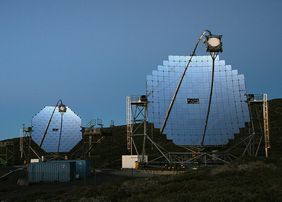 Observation of the black hole in M87: The MAGIC telescopes provided important data in the highest range of the gamma-ray spectrum (Photo: R. Wagner/MAGIC Collaboration)

The black hole image of Messier M87 is only the best-known result of the large-scale campaign led by the Event Horizon Telescope (EHT). In addition to the eight EHT radio telescopes, another 11 instruments were involved. The entire electromagnetic spectrum – from radio waves to visible light to gamma rays – of this object was thus studied.

Says Kazuhiro Hada of the National Astronomical Observatory of Japan: “To get the most out of this remarkable image, we need to know everything we can about the black hole’s behavior at that time by observing over the entire electromagnetic spectrum.” Each telescope provides different information about the behavior and activity of the black hole, which is 6.5 billion times heavier than the Sun.

Each jet is different

Two scientists from the Max Planck Institute for Physics (MPP) also participated in the study. They led the observations of the MAGIC telescopes, which, together with two others (H.E.S.S. and Veritas), recorded gamma rays in the highest energy range. “One of the goals of the joint observation was to study the focused, high-energy radiation that active black holes hurl into space as jets traveling at the speed of light,” says Alexander Hahn, a PhD student at the MPP.

The telescopes were able to detect a jet that extends about 5,000 light-years into the cosmos. The composition of jets is specific to each black hole. “The individual ‘fingerprint’ of a jet therefore reveals important details about the properties of the black hole – for example, its spin and energy output,” adds Hahn. “This is challenging, however, since the pattern changes with time."

The analysis of all observational data shows that the black hole was relatively quiet during the observation period (i.e. it hardly absorbed any matter). These conditions were ideal for observing the “shadow” of the black hole. It was also possible to specifically study light that originated very close to the event horizon – and compare it with the radiation that can be observed tens of thousands of light years away from the black hole.

The scientific work now presented also contains two models that provide important comparative values for the study of blazars, too. “Blazars are active black holes with particle jets directed toward Earth,” explains Daniel Mazin, a researcher from the MPP, who coordinated measurements from MAGIC and the other gamma-ray telescopes. “For this, MAGIC provided data points in the highest energy spectrum.”

The scientists hope that the combination of the observational data will provide momentum for further research fields in astrophysics. “For example, we can use the data to improve tests of Einstein’s theory of relativity,” says Mazin. “These tests have some weaknesses. We still know too little about the material that orbits the black hole and which is blown out into the universe as jets.”

A comparison of the observational results with theoretical calculations and simulation data suggests that there are different gases with different properties in the vicinity of the black hole. There is another unresolved research question surrounding the origin of the high-energy particles of cosmic rays that are constantly bombarding the Earth. These particles are thought to originate from the jets of black holes.

The mystery of particle acceleration

“However, it is still unclear where the particles are accelerated to such high energies,” explains Mazin. “With the MAGIC telescopes, we can study gamma rays in the highest energy range. The observational results from 2017 indicate that these gamma rays do not originate near the event horizon.”

Adds co-author Sera Markoff, from the University of Amsterdam: “Understanding the particle acceleration is really central to our understanding of both the EHT image as well as the jets, in all their ‘colors’.” Analyses of data collected in 2018 and later should provide more clarity.

What is the use of these observations?