Research like in real life! In March and April, two particle physics courses are held for pupils from 10th grade upwards. During these days, participants learn about research methods, identify elementary particles in particle collisions and "visit" experiments at the particle accelerators at CERN in Geneva, and at the CEC in Japan. 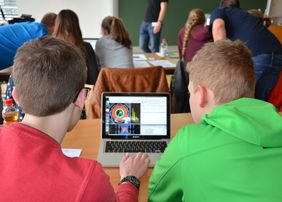 Students in the MPP's lecture hall. This will not be the case for the Masterclasses 2022: All events take place in a virtual format. (Photo: B. Wankerl/MPP)

Due to Corona-related contact restrictions, the workshops will take place as video conferences lasting several hours. Many places have already been allocated.

"We are very pleased about the great interest in our research areas in particle physics," says Barbara Wankerl, press spokesperson at the Max Planck Institute for Physics. "This also shows us that digital formats are also well received in public relations."

The courses are organised by scientists from the Max Planck Institute of Physics and the Ludwig Maximilian University (LMU).

How is it that there is more matter than antimatter in the universe? There is already a clue: a certain type of particle does not decay into matter and antimatter in equal parts, as one would actually expect. With the new Belle II experiment in Japan, which started in 2019, scientists* are trying to find an answer to the matter-antimatter puzzle.

The course introduces physics basics and the Belle II detector. Students will then work with real data from the Belle II experiment and discuss it with students from other cities. Other highlights include a virtual tour of the experiment and a live link to the Japanese research centre.

Although the structure of matter is now well understood, some questions remain unanswered: How does the interaction of elementary particles work? Why are some particles heavy, others light? Why does gravity behave so differently from the other fundamental forces we know? With the Large Hadron Collider (LHC) and the ATLAS detector at CERN, scientists are searching for new, previously unknown physics.

The course teaches the basics of particle physics and the structure of the ATLAS detector. Afterwards, the participants evaluate data from the ATLAS experiment before exchanging their results with students from other countries in an international video conference with CERN.

About the International Masterclasses

The three events take place within the framework of the 18th International Student Research Days - International Particle Physics Masterclasses. Around 13,000 pupils will experience research "live" for a day at around 225 universities and research institutions.