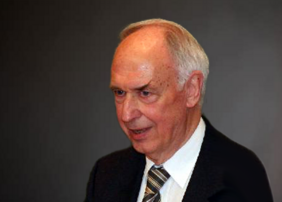 With Volker Soergel we lose an internationally esteemed colleague, who led our institute as Managing Director from 1996 to 2000 and significantly shaped its structure and further development. He took over the management of the institute in a difficult situation of internal discord and mistrust at the time. With utmost consideration and determination he laid the foundation for a structural new beginning and trusting cooperation, which are still the cornerstones of our activities and scientific success to this day.

As Managing Director of our Institute, as Professor at the University of Heidelberg (1969 – 1996), as Chairman of the DESY Board of Directors (1981 – 1993), as Research Director of CERN (1979 – 1981) and as Research Fellow at the California Institute of Technology and at CERN (1962 – 1968), Volker Soergel significantly inspired and shaped fundamental physics research and the physics of elementary particles for decades to come.

His competence, his personal integrity, his enthusiasm, his straightforwardness and his helpfulness will remain unforgotten.

on behalf of the Board of Directors and the staff of the Max Planck Institute for Physics.