The Max Planck Institute for Physics (MPP) welcomes Francesca Capel. Starting May 1, 2022, the postdoctoral researcher will head a working group for the closer study of astrophysical particles - cosmic rays and neutrinos. These high-energy particles are accelerated by powerful and distant sources, but their exact origin remains unclear to this day. The astrophysicist will receive a three-year grant through the Minerva Fast Track Program for outstanding young female scientists. 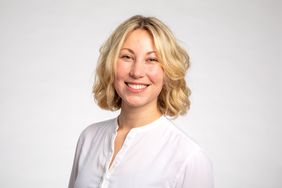 Where do the highest-energy particles in the universe come from? This is the question Francesca Capel will focus on at the MPP over the next three years. According to current understanding, cosmic rays consist of protons, i. e. hydrogen nuclei, as well as the nuclei of heavier elements, which could be accelerated to extreme energies in extragalactic sources.

Their path through the universe is not straight: The positively charged particles interact with matter and are deflected by magnetic fields. However, they leave behind them a trail of photons (particles of light) and neutrinos that can reach Earth without detours.

Together with her research group, Capel will study these different signals: cosmic rays, neutrinos and photons. “These signals can be thought of as messengers, carrying different information about their place of origin and the environments through which they have travelled. By studying them together, we can deepen our understanding of their astrophysical sources", says Francesca Capel.

Large-scale experimental collaborations, including the MAGIC/CTA gamma-ray telescopes (active at the MPP) and the IceCube neutrino observatory, have gathered large amounts of relevant data. “These data sets are very complex, and bringing the information together effectively requires advanced data analysis tools,” says Capel. The development of statistical methods will be a vital part of this research at the intersection of experiment and theory.

Prior to taking her new position at MPP, Capel was a postdoctoral researcher at the Data Science Lab of the ORIGINS Cluster of Excellence. She earned her doctorate in astroparticle physics at KTH Royal Institute of Technology in Stockholm. Her master’s degree in physics was completed at Imperial College in London, including a one-year thesis project at the École Polytéchnique Fédérale de Lausanne through the Erasmus program. Her group will also be supported by the Cluster of Excellence ORIGINS and the SFB-1258, in both of which the MPP is a partner institution.

About the Minerva Program

The program is aimed at PhDs in chemistry, physics and engineering, or in the humanities and social sciences. It provides outstanding female scientists with an early, forward-looking career option following their doctorate. Minerva Fast Track Fellowships are awarded once a year following a nomination process and subsequent evaluation. The funded female researchers receive extra funding for up to three years (material and personnel resources). After that, they have the opportunity to apply for a Max Planck Research Group.

The new group is currently hiring through the IMPRS PhD program at the MPP. The upcoming round has a deadline of May 6th 2022. Interested candidates are encouraged to apply here: https://www.mpp.mpg.de/en/studying-and-working/imprs-phd-studies/for-imprs-applicants.

Questions can be sent to capel@mpp.mpg.de.