Israel's Ben-Gurion University of the Negev and the Max Planck Institute for Physics (MPP) will collaborate closely in the field of quantum gravity. The German Research Foundation (DFG) recently approved a three-year cooperation project that is unique in this field. The funding amounts to 1.6 million euros. The project also involves scientists from the University of Würzburg, the University of Hamburg, from DESY in Hamburg and the Weizmann Institute in Israel. 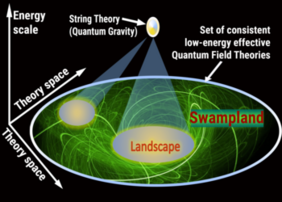 Modern fundamental physics rests on two pillars: Quantum mechanics describes the subatomic world of matter particles and their interactions, while gravitational theory describes physics on the large scales of the universe. Until today, however, the two important theories stand for themselves and cannot be reconciled. Thus, in the high-precision standard model based on quantum mechanics, all particles and forces find a place - with the exception of gravity.

For some time now, physicists have been trying to place both theories under the common umbrella of "quantum gravity". So far it is not clear how this could look like. How can such a theory be formed? A rather new approach is to first formulate the general principles that any new theory for quantum gravity must follow. Already, one such basic rule is emerging: gravity must always be the weakest force among the four fundamental interactions.

This method of getting the new theory off the ground is known in the scientific community as the Swampland Program. The cooperation partners intend to explore this swampland in the coming years to develop a fundamental set of rules that govern quantum gravity - and to determine how this affects existing theories.

"To do this, the scientists involved are applying a completely new approach based on the  holographic principle," explains Dieter Lüst, director at MPP and one of the two initiators of the project. "They combine string theory with swampland and holography methods to find a solution for one of the big issues in physics: A unified theory for quantum mechanics and gravity."

His colleague Eran Palti from Ben-Gurion University of the Negev adds, "Thanks to the new and in this form unique German-Israeli cooperation, we are able to bring together the best experts in these disciplines. With this project, we hope to set strong a impulse for the entire field of theoretical particle physics."