The impact of the European Soccer (Football) Championship 2020 on the incidence of the Corona pandemic differed a lot among the participating countries. The extent to which the numbers of infections and deaths from COVID-19 increased depended primarily on the initial situation. This was determined by physicists in an analysis of the epidemiological data. The study involved the Max Planck Institute for Dynamics and Self-Organization in Göttingen, the Max Planck Institute for Physics in Munich, as well as the Universities of Bonn and Göttingen and the PUNCH4NFDI consortium in the national research data infrastructure. 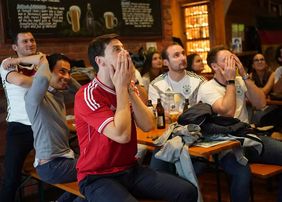 At international soccer tournaments, pathogens have it easy. This is because many people watch the matches in groups, whether in a private living room, in a pub or at public viewing, where the coronavirus, for example, can spread easily. Thus, it can be clearly demonstrated that the European Soccer Championship 2020, which took place in the summer of 2021, led to numerous infections. However, the magnitude of the effect varies greatly from country to country.

The team from Göttingen, Bonn and Munich investigated for twelve of the participating countries how the incidence of infection developed during and after the European Championship. The researchers used case numbers broken down by gender to distinguish the contribution of the European Championship to the incidence from other factors, because more men than women watch the soccer matches. This gender ratio is also reflected in different infection numbers. From this, the team calculated how many infections were due to people watching the matches together.

Major differences between England and the Czech Republic

The difference in the impact of pandemic preconditions is well illustrated by the example of the Czech Republic and England: for example, the Czech Republic played five matches in the past European Soccer championship. However, despite the country's great enthusiasm for soccer, there were only about 460 additional infections per million inhabitants. The European Championship in England had a much greater effect. There, around 11,000 people per million inhabitants were infected with the coronavirus - fifteen times as many.

This was not due to the larger number of matches, as the English team played seven matches up to the final, but rather to the completely different starting situation: In the Czech Republic, there were only comparatively few infections at the beginning of the European Championship, whereas in England the number of cases was already high at that time. The reproduction rate, which indicates how many people an infected person infects, was also relatively high. "In this situation with high case numbers and high reproduction numbers, the major sporting event gave a powerful boost to the incidence of infection," says Viola Priesemann of the Max Planck Institute for Dynamics and Self-Organization in Göttingen.

Around 840,000 additional infections due to the European Championship

Infections occurred less in stadiums than at private gatherings, for example in pubs and homes, where people watched the games together. And, of course, the infections did not stop on match days - because every infected person started a chain of infection, through which, according to estimates, an average of another four people became infected for every virus carrier during the study period up to the end of July 2021.

"You can see from this that infections are not a private matter," says Viola Priesemann. "Because the virus also spreads to vulnerable populations via such infection chains." And it is precisely among older or previously ill people, only a small proportion of whom are likely to have followed the matches themselves in larger groups, that deaths then occur.

The role of incidence and reproduction number

For all twelve countries studied, the estimates showed a total of around 840,000 additional infections as a result of the European Championship. The team was unable to estimate the extent to which COVID-19 spread due the 2022 World Cup because the infection data for many countries were no longer available in the necessary detail. In general, however, the following applies to large events during a pandemic: "If vulnerable groups are to be protected, prevention measures are necessary during a large sporting event," says Philip Bechtle of the University of Bonn.

"The comparison of countries during the European Championship 2020 clearly shows that, above all, a low incidence and a low reproduction number R are the best basis for keeping superspreading events caused by large events to a manageable level. Masks, increased testing and vaccination, and anticipatory contact reduction further help contain the incidence of infection." In this way, the burden of large-scale events on the heavily strained health care system can be reduced in future pandemics.