There is a good chance that soon a new door will open to physicists, offering them new insights into the mysteries of the universe. The international AWAKE collaboration has made a breakthrough in its efforts to build a new type of particle accelerator. The experiment, in which electrons surf on a plasma wave, accelerates particles with far less effort than is required with the LHC, for example, or with other particle accelerators used to date. Thus, physicists could bring about particle collisions with significantly more energy than has been possible so far. Studying the traces of these collisions may help scientists to gain new insights into the Big Bang and the structure of matter. 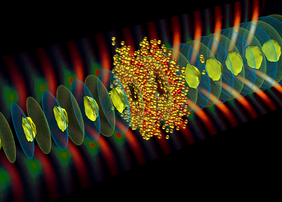 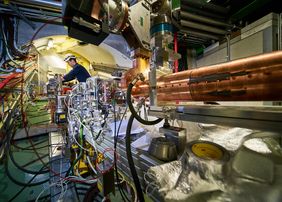 However powerful the current apparatus such as the Large Hadron Collider (LHC) at CERN may be, it can already be foreseen that significantly more energy will be needed in order to answer questions about particle physics that remain open. Is there super-symmetry, what is dark matter, and what is the force behind dark energy? However, the technologies used to date can only be improved and expanded at great expense.

For this reason, the question arises of how to create alternative, lower-cost accelerator concepts. With AWAKE (*), scientists are currently developing a highly promising technology for linear accelerators, which use electrons as collision material.

The same energy over a length that is 50 times shorter

“Our team is pursuing the goal, with the aid of a plasma, of accelerating electrons over a relatively short distance”, explains Allen Caldwell, Director at the Max Planck Institute for Physics (MPP) and spokesperson for AWAKE. “We assume that in a future plasma accelerator, we will need just 1 meter in order to bring electrons to 1 gigaelectronvolt (GeV).” In comparison, standard linear accelerators need 50 meters to achieve the same result.

Following a four-year development period, the scientists are now reporting a breakthrough. On 25 May 2018, they were able to observe for the first time how electrons could be accelerated with AWAKE. The electrons achieved an energy of 2 GeV.

Allen Caldwell is delighted: “We assumed that we wouldn’t achieve this kind of success until the autumn. With the energy we have now obtained, our expectations have been met in full. In this early project phase, the focus was initially on checking the extent to which the principle of plasma acceleration can be implemented.”

AWAKE uses a plasma, a gaseous mixture of positively charged atoms and negative electrons, which is located in a chamber that is approximately 10 meters long, the plasma cell. A proton beam is injected into this chamber.

On their path through the plasma, the positively charged protons carry the negative electrons from the plasma with them and produce a type of wakefield. When electrons are also added, these ride on the wave and are accelerated. The concept of plasma wakefield acceleration is not entirely new, however. During the 1970s, it was already being discussed as an innovative approach. However, the first experiments did not use protons as “wave generators”.

“At first, the plasma waves were created with electrons or a laser. However, the waves produced were too weak for effective particle transport”, explains Patric Muggli, AWAKE project leader at the MPP. “AWAKE uses protons as a first experiment. They are heavier, can penetrate deeper into the plasma and can therefore carry other particles with them over a longer path. The result is higher energy among the surfing particles.”

First experiments due to begin in 2024

The use of a proton beam is also the reason why AWAKE is located at CERN. In this way, scientists can use energy-rich protons from the SPS ring, one of the LHC pre-accelerators.

What will happen now that this important milestone has been reached? Until the end of the year, the scientists will conduct experiments with the existing structure. The LHC will then be shut down for two years. The scientists will use this period to further develop the plasma cell. Here, the AWAKE team has a clear goal in mind.

As Allen Caldwell explains: “We want to use AWAKE by 2024 as an application for scientific projects - for example, in order to understand the fine structure of protons or to search for new particles such as ‘dark photons’, which are possible candidates for dark matter.”