July 4, 2012 marks an unforgettable day in particle physics. On this date, the ATLAS and CMS experiments at CERN announced the discovery of the Higgs boson. This year's 10th birthday of the Higgs particle is being celebrated in around the world. In Germany, the Committee for Elementary Particle Physics (KET) has called for a nationwide day of action - the Max Planck Institute for Physics (MPP) is also joining along with the Cluster of Excellence ORIGINS. 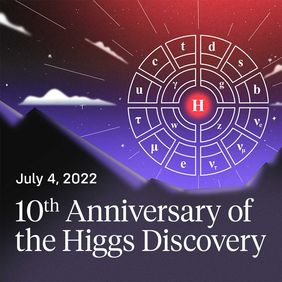 The Higgs boson is a unique particle. It is the messenger of the so-called Higgs field, an invisible medium that fills the entire universe. The Higgs field gives elementary particles their mass and is therefore also the basis of our existence.

As a theoretical model, the Higgs existed long before its actual discovery. As early as 1964, Peter Higgs, Robert Brout and François Englert described the Higgs field and the Higgs particle mathematically. After that, it took several decades until the machine to detect the Higgs boson and to clarify other questions of particle physics was ready: the Large Hadron Collider (LHC) with the detectors ATLAS and CMS at CERN.

In the LHC, protons are accelerated to high energy before colliding at nearly the speed of light. The collision creates countless particles, including Higgs bosons every now and then, which transform into other particles almost instantly. In this debris field, scientists are searching for usable tracks that can be traced back to specific particles - for example, also to the Higgs. Starting in 2009, physicists at CERN collected and analyzed a vast amount of such collision data until they were able to reliably detect the Higgs particle in 2012.

The anniversary program at MPP will take place at 6 p.m. on July 4. At 8 p.m., a small birthday party will take place in the foyer, where participants can exchange ideas with scientists.

Several short lectures and some entertaining intermezzos are planned. The focus will of course be on the birthday child: How did Peter Higgs and his colleagues "find" the Higgs particle in their calculations? Why did it take so long to actually discover it?

With its discovery, the research on the Higgs boson is far from finished. The more details become known about the Higgs and its interactions, the better we understand the structure of matter in the universe.

The anniversary program at MPP will take place at
6:00 p.m. on July 4. At 8.00 p.m., a small birthday party will take place in the hall, where participants can exchange ideas with scientists.

Since we have only a limited number of places, we kindly ask to register at https://indico.mpp.mpg.de/e/higgs_10

The language of this event will be German.