The CRESST experiment is continuing its search for dark matter. A few weeks ago, the detector reached its operating temperature of around -273 degrees Celsius, i.e. close to absolute zero. For the new measurement started in September, the experiment has been fundamentally overhauled: among other things, a novel type of detector is now being used. In future, CRESST will be able to search for very light dark-matter particles – in a mass range which is currently not covered by any other experiment. 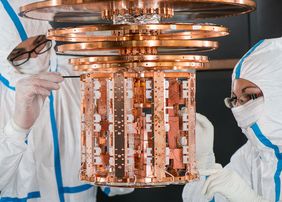 Installing the new detector modules into the CRESST experiment (Photo: A. Eckert/MPP)

The CRESST experiment has recently started a new measurement run; the last one ended in August 2015. At that time, it turned out that some of the detectors were highly sensitive to very light dark-matter particles. This prompted the scientists to upgrade all detector modules.

The new sensors reduce the energy threshold for particles of dark matter. “During the last measurement phase, CRESST advanced into a very low energy regime down to 300 electronvolts,” explains Federica Petricca, scientist at the Max Planck Institute for Physics and spokesperson for the CRESST research collaboration.

“In the future we will be able to detect particles that are much lighter than a gigaelectronvolt.” This mass regime agrees with more recent theoretical models which predict very light dark-matter particles.

Overall, the search area for particles of dark matter will expand significantly. All current experiments together cover a spectrum from very light to very heavy particles: from less than a gigaelectronvolt (CRESST) through to several 100 gigaelectronvolts (Xenon 1T).

The CRESST experiment uses crystals of calcium tungstate (CaWO4). As the expected collisions between the particles and the atoms in the crystal are extremely rare, it is crucial to avoid interference signals as much as possible. In order to reduce the radioactive background originating from the crystal itself, CRESST uses crystals with a high level of chemical purity produced at the Technical University of Munich.

The mountings for the crystals have been optimized as well – they are also now equipped with sensors. “We can thus determine exactly where in the detector particle interactions occur  and distinguish dark-matter signals from background sources,” explains Petricca.

CRESST expects the first results from the recently-started measurement in about a year. The group is also working on further reducing the threshold for light dark-matter particles. “The ultimate goal is to expand the search region even further – and thus track down the mystery of dark matter,” says Petricca in conclusion.