Despite the corona pandemic, the production of next-generation ATLAS muon chambers at the Max Planck Institute for Physics (MPP) is proceeding as planned. Due to the current contact restrictions, the technicians are only permitted to work in shifts that vary on a daily basis. Nevertheless, the construction of 48 new muon detectors is scheduled to be completed by the end of 2022. These will be integrated into the ATLAS experiment, which between 2024 and 2027 is to be retrofitted for the high-luminosity upgrade of the Large Hadron Collider (LHC). 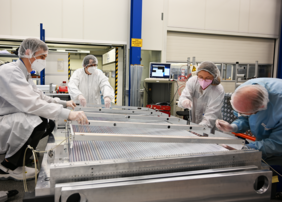 Team work in the clean room: MPP employees are mounting an optical measuring system onto the drift tube layers. It monitors potential deformations due to the self-weight of the muon chamber. The signal wires in the drift tubes are positioned with an accuracy of 1 hundreth of a millimeter. (Photo B. Wankerl/MPP) 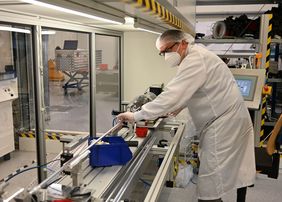 At the MPP, technicians produce and test 280 drift tubes per week. 560 of these drift tubes are mounted in each muon chamber: They measure the traces of muons, which are produced with particle collisions in the ATLAS detector. (Photo: B. Wankerl/MPP) 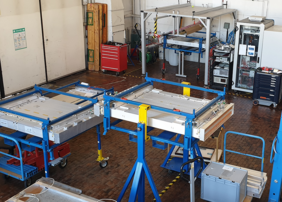 Muon chambers for the ATLAS experiments in several production states in the experimental hall. The chamber front left is ready for shipping to CERN, the chamber on the right is waiting for installation of read-out electronics. In the background a chamber undergoes its final test before transport. (Photo: H. Kroha/MPP)

The LHC at CERN will soon embark on a major upgrade. The aim is to increase the rate of particle collisions by a factor of 5 at least. “The ATLAS detector, where the particle collisions occur and are recorded, needs to be able to keep up with this,” explains Hubert Kroha, head of the Muon Spectrometer Group at the Max Planck Institute for Physics.

Over the next two years, a total of 100 new muon chambers designed by the MPP are to be produced and subsequently mounted in the ATLAS detector. In order to realize this project, working groups at various US universities are involved in the project, managed by the MPP. They are producing half of the muon chambers following the MPP design plan. The other half is being constructed at the MPP.

Great committment of the teams

“We are on schedule with the production of the muon detectors both at the MPP and in the USA,” says Kroha. “This is mainly due to the great commitment of the workshop teams." Owing to the COVID-19 pandemic, only 50 per cent of staff members from the workshop can work on the chambers at any one time.

The production steps of the chambers are carried out in separate locations, meaning that they can progress in parallel. As a result, technicians at the MPP and in the US labs can complete two chambers each month. “Even if our ‘production belt’ is running smoothly, we do hope that the pandemic will ease in the coming months – reducing the workload for our staff in the technical departments,” states Kroha.