The search for rare particles continues unabated at the Large Hadron Collider (LHC). In fact, the LHC will not achieve its peak performance before 2025; by then the upgraded High Luminosity (HL) LHC will accelerate and collide considerably more proton bunches than before. Scientists will need to analyze more particle tracks correspondingly. Already, they are starting to prepare the ATLAS experiment for the future: The kickoff meeting for the ATLAS experiment’s new muon detectors will take place on October 13, 2015, at the Max Planck Institute for Physics in Munich. 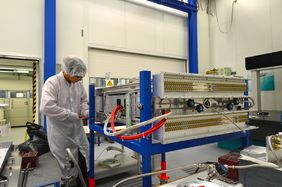 A detector gets an update: Work proceeds on a muon chamber that is scheduled to be integrated into the ATLAS experiment at the end of 2016. Chambers of this type are also expected to be used for the HL-LHC project. (Picture: B. Wankerl/MPP)

With the ATLAS experiment at the LHC, scientists are trying to find an explanatory model for the origin of matter and forces in the universe. To that end, day by day, they evaluate millions of particle tracks that arise from proton collisions at the LHC. A key role in the process is played by muons, one of the particle types related to electrons.

To enable ATLAS to keep pace with the increased rates of particle production at the planned HL-LHC, scientists will overhaul the entire ATLAS detector. In this effort, the focus of the Max Planck Institute for Physics is on the muon detectors, with which the highly energetic muons produced by the collisions will be recorded and measured.

At the „ATLAS Muon Week“, scientists from around the world will discuss suitable concepts for the new muon detectors. The kick-off meeting will take place on October 13, 2015, at 14:00. The CERN expert Dr. Werner Riegler will open the discussion with a general introductory talk on “Detector Development for Future Colliders.”