A few days ago, the final components were installed in Belle II. With the aid of special tracks, technicians very gently pushed the highly sensitive vertex detector into the correct position inside the Belle II detector. Over the coming weeks, the vertex detector will be linked via cables to the electronic system for data evaluation. The first measurements with the completed Belle II detector are planned for March 2019. 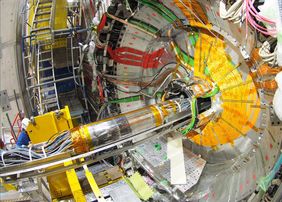 The Vertex Detector on its way into the core of the Belle II Detector (Photo: Belle II Collaboration) 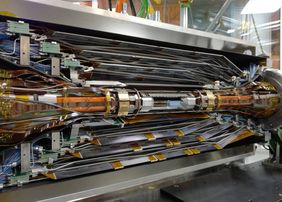 View into the inner part of the Vertex Detector: In its center there is an innovative Silicon Pixel Detector - about the size of a beverage can. (Photo: Laura Zani)

The recently installed vertex detector consists of two parts, which have been joined together over the past few months. Right inside on the beam pipe, there is an innovative silicon pixel detector that has been developed especially for Belle II, which is about the same size as a drinks can. Scientists and engineers from the Max Planck Institute played a leading role in developing its technology and in its construction and completion. The outer layer consists of standard silicon strip detectors.

Close-up to the “scene of the crime”

The instrument provides scientists with information about the precise decay spot (“vertex”) of the particles that are created when electrons and positrons collide. In the new SuperKEKB storage ring at the KEK in Japan, the electrons and positrons circulate in counter directions in densely packed bundles. They are brought to collision in the center of the Belle II detector.

When electrons and positrons collide and destroy each other during the process, pairs of B-mesons are formed with their anti-particles. B- and anti-B-mesons have been proven not to disintegrate in equal parts. Physicists now want to investigate this symmetry break in greater detail. The precision experiments with Belle II are intended to provide information about why anti-matter has vanished almost entirely from the Universe.

Over the coming weeks, the vertex detector will first be connected to its read-off components and thoroughly tested. In January 2019, there will be a dress rehearsal of the entire Belle II detector lasting several weeks, with cosmic rays. Scientists anticipate that the first measurements and analyses of electron-positron collisions will be available in mid-March 2019.