The construction of the COSINUS experiment in the underground laboratory at Gran Sasso LNGS (Laboratori Nazionali del Gran Sasso) is making great progress. The first large component has been erected in the last weeks. It is a water tank (7 meter in diameter and height) that carries out the fundamental task of shielding COSINUS cryostat and detectors from the external radiation. The team led by Karoline Schäffner, a scientist at the Max Planck Institute for Physics (MPP), expects to finish the installation of the complete facility by end of 2022. First physics results are expected by beginning of 2024. 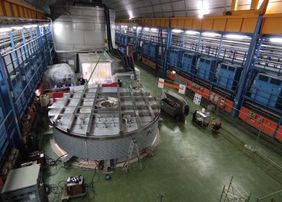 Erection of the water tank in the COSINUS experiment (Photos: U. di Sabatino/LNGS) 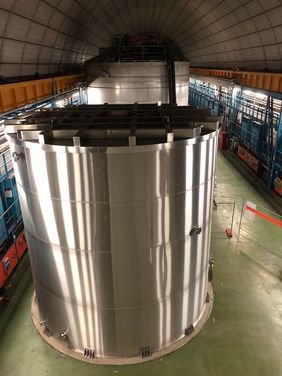 Work in the hall B began in November 2021. Since then, in addition to the water tank, the researchers of the COSINUS project have also developed a new design for the thermometer used to read out the detectors. Now the calorimeters achieve a low energy threshold and allow for identification of different particle types. This is another milestone for COSINUS.

„At the end of 2022, the big part of the experimental setup will be ready" says Karoline Schäffner. "The first steps will then be the commissioning of the refrigerator system, followed by the assembly and mounting of the first COSINUS detector array. If COVID does not create drastic delays, the first measurement can start mid 2023, with first dark matter results expected a year later."

Can COSINUS confirm the results of another experiment?

The COSINUS scientists are pursuing the goal of verifying the results of another experiment - and thus possibly detecting dark matter. For about 25 years, the DAMA/LIBRA experiment has been measuring signals that match dark matter particles. The problem: Other experiments could not confirm these results. The generally accepted proof of dark matter is therefore still pending.

"The approach of COSINUS is to run the crystals of sodium iodide at extremely low temperatures," Schäffner explains. "A dark matter particle would leave two traces when it interacts with the detector: a short flash of light and a tiny temperature increase that can be measured with a special thermometer." These thermometers were developed at MPP for the CRESST dark matter experiment and are now being manufactured there for both experiments.

The international COSINUS team from a total of eight institutions hopes to have the first results in early 2024.