Today ATLAS and other particle physics experiments at CERN's Large Hadron Collider (LHC) began recording physics data from 13 TeV proton collisions, which allow for precision studies of the Higgs boson and other Standard Model particles, as well as the search for new particles with higher masses. The new data will bring a deeper understanding of nature. 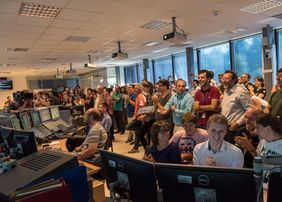 "What we know for sure is that we will collect a large statistical sample of Higgs bosons with which we will be able to sharpen our knowledge and understanding of the behaviour of this particle," says Ludovico Pontecorvo, ATLAS' new technical coordinator.

ATLAS, together with CMS, announced the discovery of the Higgs boson in July 2012. Following the discovery and initial Higgs particle studies, the LHC entered its first Long Shutdown. During this time, ATLAS worked hard to upgrade the detector and its data acquisition and world-wide computing systems to allow the efficient collection of the high statistics and high precision data samples at the higher energies needed for the next phase of measurement and discovery.

ATLAS' data taking efficiency in the LHC's Run 1 was very high with impressive data quality. The experiment aims to maintain or even improve this in the new run.

"Our experience from the 2010-2012 run is allowing us to prepare for the new, higher energy and higher intensity data, and we are already seeing very good detector performance with data ready for fast and high-quality analysis," says Rob McPherson, ATLAS deputy spokesperson. "We are ready to confront this new, high energy scale where we have hints that spectacular new physics signatures can be observed."

Bringing the detector back into operation and preparing it for the record-setting high energy particle physics collisions has been one of ATLAS' greatest achievements. Re-commissioning ATLAS took several months with nine Milestone Weeks towards the end of the Long Shutdown with sub-systems integrated one at a time.

"First stable beam data taking feels like playing the opening bars of a well-rehearsed symphony: tension and excitement mixed with anticipation," says Alex Cerri, ATLAS' Run Coordinator. "We are hoping to see all the preparation come to fruition and to find something unexpected in our data, hinting to what nature looks like beyond this new energy frontier."

Data taking to data analyses involves many months, sometimes even years, of hard work before results are meticulously checked, peer-reviewed and finally, published. "The road ahead may be long but to have the LHC and ATLAS running again, at this new energy frontier, is already a huge and amazing milestone," says Alessandro Polini, also ATLAS' Run Coordinator.

"The successful restart of physics data taking with ATLAS, with all systems in great shape to collect, process and analyse the new data quickly, is a testament to the commitment and immense hard work of very many people from many different parts of ATLAS during the Long Shutdown," says Dave Charlton, ATLAS' spokesperson. "We now start to look both broadly and deeply into the new data, to see what nature has in store for us at this new, unexplored energy."