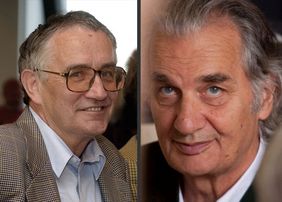 The elementary building blocks of matter and how they interact are investigated in experiments carried out using particle accelerators. Nowadays, nearly all these experiments use silicon detectors with high spatial resolution. Dr. Erik Heijne from CERN European research center, Prof. Dr. Robert Klanner from the University of Hamburg, and the recently deceased Dr. Gerhard Lutz from the Max Planck Institute for Physics, were instrumental in bringing about the breakthrough of this technology in the 1980s.

For their contributions to the development of silicon microstrip detectors and their use to detect short-lived elementary particles, the physicists received the High Energy and Particle Physics Prize 2017 in a ceremony on 10 July 2017 during the European Physical Society Conference on Particle Physics in Venice.

The task of particle physics detectors is to measure particles produced in interactions as accurately as possible. To measure the tracks of charged particles, several layers of silicon detectors - currently the most accurate electronic detectors - are arranged around the point of interaction. The momentum and direction of the particles can be determined from the precisely measured track points. These detectors therefore make a crucial contribution to a better understanding of the structure of matter. Silicon detectors also played a pivotal role in the discovery of the Higgs particle.

In the early 1980s, the three prizewinners developed silicon strip detectors with a spatial resolution of five micrometers. This was 20 times more accurate than other electronic detectors available at that time. Six such detectors were used at the Max Planck Institute for Physics in Munich to build an instrument which could then be used in the NA11 experiment at CERN to accurately measure particles with the charm quantum number, which decay in less than one millionth of a millionth of a second after they have been created.