Giulia Zanderighi, Director at the Max Planck Institute for Physics is now Liesel Beckmann Professor at the Technical University of Munich (TUM). With this professorship, TUM honors outstanding female scientists whose careers serve as role models for young female academics. 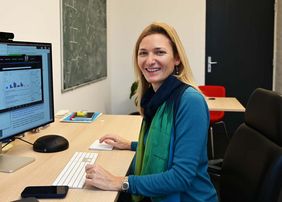 Giulia Zanderighi is an internationally recognized expert in the field of accelerator phenomenology. This theoretical discipline studies elementary particles and their fundamental interactions. A few days ago, she received the "TUM Liesel Beckmann Distinguished Professorship" award for her excellent achievements as a researcher and lecturer.

Giulia Zanderighi studied physics at the University of Milan and earned her doctorate at the Università degli Studi in Pavia. Her academic career led her to the University of Oxford via the Institute for Particle Physics Phenomenology in Durham, Fermilab and CERN. There she obtained a position as Professor of Physics in 2010. Since January 2019, she has been director at the Max Planck Institute for Physics and heads the department "Innovative Computational Methods in Particle Physics.

With the Liesel von Beckmann Professorship, TUM honors female academics in top positions to encourage young women to pursue scientific careers. The award is part of a strategy to increase the proportion of women in professorships to 25 percent by 2025.

"I am extremely pleased to receive this award," says Giulia Zanderighi. "Liesel Beckmann was an outstanding person and pioneer for all women in science. This professorship is important for making women in science more visible - and eventually achieving gender parity in academia."

Liesel Beckmann, who gave her name to the professorship, was Germany's first female habilitated business economist, first female professor and the first woman to hold her own chair. Women were considered unsuitable for scientific work at the time. Because of her outstanding work and the tireless efforts of her mentor Karl Friedrich Rößle, an exception was made for Liesel Beckmann. However, she had to declare in writing that she would remain single and would only pursue the "academic career as her life's goal".